Monaco manager ​Thierry Henry is facing the sack after just three months in charge, with the French side suspending him from first team duties ahead of a final decision.

Henry was appointed on 18 October with the mission of leading Monaco away from danger, after Leonardo Jardim had been sacked with the club mired in the relegation zone.

However, Monaco have won just two of their twelve Ligue 1 matches under Henry, and last weekend's 5-1 defeat to Strasbourg left them 19th in the table, three points adrift of safety.

Monaco confirmed in an official statement on the ​club website that Henry had been suspended, with assistant manager Franck Passi taking charge of Friday's training session.

Monaco failed to win any of their first six games under Henry, a run which included a crushing 4-0 Champions League defeat to Club Brugge - their heaviest ever loss in the competition.

Wins over Caen and Amiens restored hope, but those proved to be Monaco's only league victories under Henry, and his fate was sealed by that thrashing against Strasbourg followed by Coupe de France elimination at the hands of second-tier Metz. 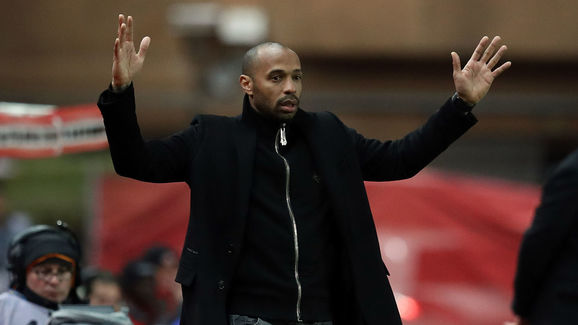 It is less than two years since Monaco won Ligue 1 under Henry's predecessor Jardim, but a mass exodus of players - including Kylian Mbappe, Benjamin Mendy, Bernardo Silva, Thomas Lemar and Fabinho - has resulted in this dramatic reversal of fortunes.

Monaco have not confirmed if Passi will take charge of Saturday's Ligue 1 match away at Dijon or next Tuesday's Coupe de la Ligue semi-final against Guingamp.