​Liverpool had become somewhat of a European force under Rafa Benitez despite underwhelming domestically.

The Reds' miraculous run in 2005 was built of stringent tactical organisation, as they outfoxed Bayer Leverkusen, Juventus and Chelsea before facing off against Milan in the final - where a tactical alteration at the break ultimately helped nullify the Rossoneri's conductor, Kaka, and saw them do the unthinkable.

And in 2008, a season from another impressive run to the Champions League final, Benitez's men found themselves in prime time once more as they took on Arsenal in the quarter-finals. Dirk Kuyt had swiftly cancelled out Emmanuel Adebayor's opener at the Emirates the week prior, handing the Reds the advantage heading into the second leg at Anfield.

But it was Arsenal who found themselves in front on the night as Abou Diaby blasted home with a fierce drive from inside the area.

Sami Hyypia then headed home expertly from an outswinging Steven Gerrard corner to restore parity before Fernando Torres fired the home side into the lead 20 minutes from time with a brilliant finish past a motionless Manuel Almunia.

The drama wouldn't end there, however, as Adebayor's 84th-minute strike put the Gunners back in pole position following a majestic piece of transitional play from substitute Theo Walcott. But did you Liverpool Benitez was known for his tactical nuances in some of Liverpool's biggest games during his six-year tenure on Merseyside but in this one, his key alteration was a little less subtle.

The Spaniard gifted target-man Peter Crouch a rare opportunity to start up top with Torres in his compact 4-4-2, but in the early stages it looked like his masterplan was destined to fail. The pair struggled to combine and ultimately failed to test Almunia as Arsenal started the brighter.

But the duo became more in tandem as the game wore on and for Liverpool's second, they teamed up to simple but devastating effect. Crouch out-duelled William Gallas for the long ball and flicked on to an onrushing Torres, who timed his run in behind his strike partner to perfection before chesting, controlling, swivelling and firing an unstoppable effort into the far corner.

In the end, Benitez's decision to go with the unfamiliar strike pairing had worked a treat. Gerrard this, Torres that, yeah, yeah, yeah. It's time we showed Ryan Babel some love.

First, he won a penalty seconds after the restart following Adebayor's equaliser; beating both Cesc Fabregas and Toure with a nifty burst of acceleration inside before the latter rather clumsily collided with the winger, forcing him to the ground.

Babel then executed Benitez's initial plan for him to perfection in the closing stages, netting Liverpool's fourth on the break. Left one-on-one with Fabregas, the Dutchman pounced on Kuyt's clearance before outpacing the fatigued Spaniard and coolly finishing past an erratically positioned Almunia. 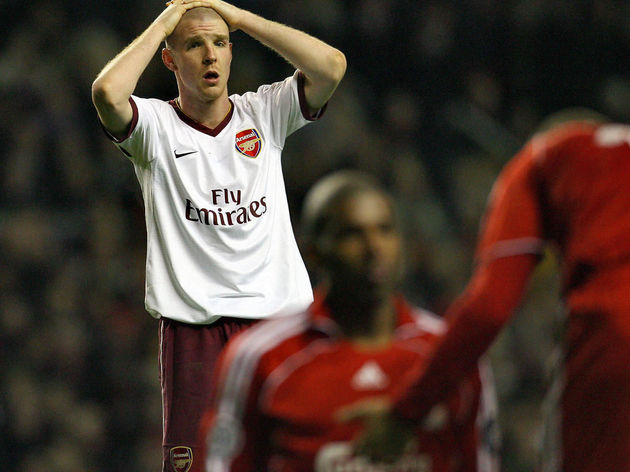 Over a decade of uncertainty in the Gunners defence started right around this time, as some shoddy defending let them down in this one.

Their impressive start was nullified by Phillipe Senderos, with the Swiss centre-half deciding to chase Hyypia's shadow for Liverpool's first before Toure's clumsiness proved costly later on in proceedings.

Arsene Wenger's side certainly created enough, however, with Walcott's introduction a big momentum shifter before a rather contentious penalty decision handed the Reds the advantage late on. An underrated performer during his time in north London, Hleb put together a fine display at Anfield.

Deployed in a number ten role behind Adebayor, Hleb was a constant menace between the lines and was able to slice through the Liverpool backline with intricate through balls only to be let down by his striker's knowledge of the offside rule.

His intelligent movement meant he was a tough proposition to track all night, while his supreme technique allowed him to excel in tight spaces. With Fabregas enduring a bit of a stinker, Hleb served as Arsenal's chief creator.

Out of possession, he also played a key role in shutting out Liverpool's deep-lying playmaker, Xabi Alonso. Following back-to-back exits to Pep Guardiola's imperious Barcelona, a shock exit to Monaco would follow in 2015 before that 10-2 aggregate defeat to Bayern Munich

Between 2010 and 2017, Wenger's men failed to progress past the last 16 and now, they've succumbed to the trenches of the Europa League.

Things That Aged the Best It's fair to say that European nights at Anfield haven't got any worse since this classic played out either. From the 4-3 victory over Dortmund to the 4-0 comeback win against Barca, Anfield's proven to still have that magical feel about it during Jurgen Klopp's reign. Chelsea were finally able to avenge their controversial 'Ghost Goal' defeat in 2005 as they beat the Reds 4-3 on aggregate in the semi-finals following another classic at Stamford Bridge.

From a domestic standpoint, Liverpool enjoyed a six-game unbeaten run to round off the Premier League campaign; comfortably finishing fourth - seven points off third place Arsenal