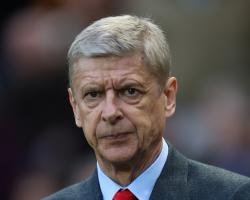 The Carpetright founder told the Daily Mail that the financial hangover from building the Emirates Stadium is now over and Wenger has the funds to make a big splash in the transfer market - if he wants to.

"Money was tight when we moved to the Emirates but it's a lot freer now," he said

"We could go into the market and probably buy any player in the world, apart from half a dozen who are unbuyable

In the accounts, there's over ÃÂ£200million in the bank

You could say to Arsene we've got no money and he wouldn't worry, or you could give him ÃÂ£100m and he might not spend it."

He added: "We would back him to break the club's transfer record

If he wanted the man, he could have him

Apart from Messi and Ronaldo, he could have any player."

Although he said "at the moment there are no plans to sign anyone", Lord Harris also teased that the Arsenal boss has an eye on reinforcements up front and the north London club will have to spend big to get his target

"We get a list of the players that Wenger wants," he said

"On the list is a centre forward, but I'm not going to tell you who he is

"You've got to get the other team to want to sell him, but I think he wants to come

It basically comes down to whether the other team can find a superstar to replace him, because they don't have to sell."