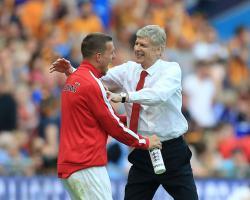 The 31-year-old forward, who marked his 130th and final Germany appearance with a stunning winner against England on Wednesday, played under Wenger during a three-year spell at Arsenal before joining current club Galatasaray in 2015.

And Podolski believes Wenger, whose future in north London is uncertain, is going to be a hard act to follow at the Emirates

He told Sky Sports: "I follow nearly every match - when not live, on social media - and I don't know what's happened

"Arsene Wenger is a good guy and a good coach

He built this club from nothing to now, and it will be interesting what happens in the next months."

When asked whether he thinks Wenger should stay, Podolski added: "I don't know who the guy is that can replace him