Maestro Mesut Ozil set to have an amazing season for Arsenal 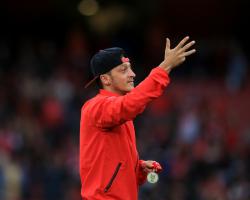 ArsenalÃâs number 11 Mesut Ozil hasn't really lived up to expectations at Arsenal thus far, but that could all change this season

In last season's FA Cup Final Mesut Ozil put on a fabulous display against Aston Villa, helping the Gunners win back-to-back trophies for the first time in a long time.

Then, in pre-season, he scored a number of goals and looked in top form

Mesut Ozil was incredible and created plenty of chances

Even though it has only been two games, Mesut Ozil has created the most chances in the Premier League since the season began almost two weeks ago, and has tripled the amount of chances Fabregas has

All Mesut Ozil needs is a clinical striker that he can put away the chances created for him.