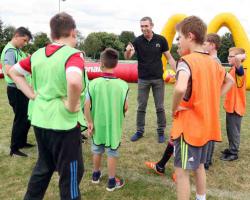 Keown also added his voice to those criticising Mesut Ozil's recent performances, describing the midfielder as an "icing-on-the-cake type player", who fails to pull his weight defensively in crunch matches.

Wenger's future remains the most pressing concern given the Frenchman's contract expires at the end of the season, with his team on course to end a 13th consecutive campaign without winning the Premier League

Keown, who was part of all three of Wenger's title-winning squads in 1998, 2002 and 2004, believes Arsenal's longest-serving manager should be granted one more year at the helm.

"My gut feeling is that he'll stay and then it's really how long he'll stay for," said Keown, an ambassador for the 2017 FA & McDonald's Community Awards.

"I imagine he'll be given more time but I think maybe only one more season.

If he was to win the Champions League or the league they could look at extending it again.

"But to get everyone on board and for the fans to buy into it, it would be like a one season to go, one more season for Wenger, and it would give the great man the time he deserves."

A section of Arsenal supporters have grown increasingly frustrated with the team's lack of progress in recent years and many expressed their disapproval during the team's recent defeats to Watford and Chelsea.

You're inspired when you're in his company," Keown said.

"The board and the people around him, the decisions they've made, he's had a huge influence in those, so they can't just snatch him away.

We are getting closer to that

It's the timing of his exit that needs to be planned.

Which manager they would turn to?

"We've seen Jurgen Klopp and Pep Guardiola arrive at Liverpool and City and they've not been successful either in terms of winning trophies."

Arsenal may look on with some trepidation at how Manchester United have responded to the departure of Sir Alex Ferguson in 2013 after the Scot's 26 years in charge.

United have twice failed to qualify for the Champions League in the three years since, and are on track to miss out again this season as they currently sit sixth in the table.

"I hope we're not looking back in years to come and saying, 'do you remember the good old days when we were in the Champions League every year?'" Keown said.

"I think that's why - Arsene Wenger knows where that replacement is, he comes across managers all the time - I'd like to think he'll be a part of choosing his successor.

If he loves the club so much he should be a part of that."

Arsenal now turn their attention away from the league and towards two polar opposite cup ties, the first against Bayern Munich at the Allianz Arena in the Champions League last 16, and the second against non-league Sutton United, at Gander Green Lane, in the FA Cup fifth round.

Wenger will need his key players to be at their sharpest against Munich on Wednesday, in particular Ozil, whose dramatic dip in form continued with an erratic display against Hull last weekend.

Ozil has indicated his readiness to sign a new contract at Arsenal will depend on Wenger staying but Keown says the German needs to contribute more on the pitch.

"Arsenal need more from him, particularly from a defensive point of view

"Maybe I'm being unfair, it can be difficult to recover back, but you see other players doing that

His body language is an issue and he's suffered lately, particularly in the big games."

:: Martin Keown was speaking at the launch of the 2017 FA & McDonald's Community Awards, recognising achievement regardless of age, gender or disability