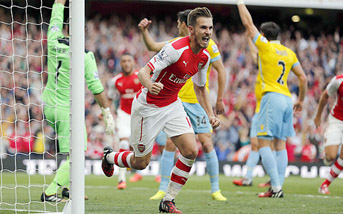 The Gunners are seeking revenge for the 3-0 defeat late last season, which came close to costing them Champions League play.

Per manager Arsene Wenger, Arsenal will be without captain Mikel Arteta who suffered an ankle injury against Besiktas last week.  Kieran Gibbs will be unavailable for another week or two due to a hamstring injury suffered against Crystal Palace. Yaya Sanogo could be available but will unlikely start after not travelling to Besiktas. Theo Walcott will likely be back in training by the beginning of September per Wenger.

The Germans will most likely be back in the squad, however, Arsene Wenger doesn’t know if he’ll use all three due to lack of competition but all three could be available.

As for Everton, they’re coming off a 2-2 draw against new boys Leicester City. They are also still without midfielder Ross Barkley who is sidelined for a few months. Gareth Barry and Romelu Lukaku both made their first appearances for Everton after joining permanently and new signings Besic and Atsu were unused substitutes. After facing Demba Ba, Romelu Lukaku will be another huge test for young defender Calum Chambers, who will likely start at center back alongside Koscielny.

Arsenal are coming off a 2-1 victory against Crystal Palace in the Premier League, which saw Aaron Ramsey bang one home in the 91st  minute. In mid-week, the Gunners travelled to Besiktas for the first leg of Champions League qualifying and were held to a 0-0 draw. Everton will be a real test, and Wenger believes his side is ready for it. We will probably see a similar team that we saw against Besiktas, with Nacho Monreal starting in place of Gibbs and Olivier Giroud starting up top.  Flamini is the most likely replacement for captain Mikel Arteta in the defensive midfielder role.

It is likely that we could see Ozil, Podolski, and Mertesacker come in off the bench or even start but that decision is up to the manager after a week of training.