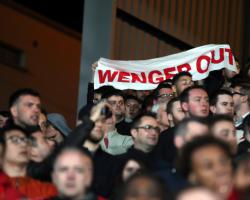 The Frenchman came off the bench for Crystal Palace as the Eagles secured a 3-0 win over his old side on Monday night, inflicting a seventh defeat in 12 games on an Arsenal outfit looking bereft of confidence.

After falling behind to goals from Andros Townsend, Yohan Cabaye and a Luka Milivojevic penalty, scores of travelling fans turned on boss Arsene Wenger and the Arsenal players towards the end of the Selhurst Park clash.

Chants including "Arsene Wenger, we want you to go", "We want Wenger out" and "You're not fit to wear the shirt" were clearly audible inside the ground, with Arsenal's players then subjected to verbal abuse as they headed for the team coach.

As well as a dreadful run of form which has seen Arsenal drop out of the Premier League title picture and face an uphill battle to finish in the top four, there has also been a backdrop of protests over Wenger's future.

The Frenchman is yet to announce whether he will sign a new deal or end his two-decade spell at the helm when his current contract expires at the end of the season.

Pressed on the matter following the defeat, Wenger said it was "inconvenient" to discuss his future and he has often claimed the uncertainty has had no effect on his players, despite their alarming slide.

A 10-2 aggregate loss to Bayern Munich in the Champions League caused further heartache for Arsenal fans, with Flamini counting himself among them.

"I understand also the frustration of the fans because they are such a big club and they want their team winning and it is not an easy situation," he said.

Results are not what they want, that is for sure

But they have a lot of quality.

"It is painful because I am still an Arsenal fan

I spent many years over there so my heart is white and red.

It is such an amazing club

The season is not finished

There are many games ahead

I believe they can do it

It is up to them.

Of course everyone is disappointed

When you are a big club you want to win every game, so that is normal."

Flamini made 246 appearances over two spells at Arsenal but is now concentrated on helping to keep Palace in the top-flight.

"We played a great game," he said.

Of course the confidence was high

On the other side, it is never an easy game to come and play at Palace

They conceded a goal and it was not easy to come back."

Townsend put the Eagles ahead as Sam Allardyce's side went on to claim a fifth win in six games to move six points clear of the relegation zone.

The former Tottenham man enjoyed his goal and, while like Flamini his focus in on Palace, the 25-year-old admits he would like to see Spurs finish above their north London rivals.

Asked if he thought his former club would get the better of Arsenal for the first time since 1996, Townsend replied: "I hope so

I hope so, but I am just focusing on Crystal Palace and hoping we survive.

"Obviously being a Tottenham boy, to score against Arsenal is an incredible feeling

And to help us on the way to a great win

The important thing was the three points."

Arsenal were once again captained by Theo Walcott and, after hearing the displeasure from their own supporters, the England international conceded things are just are not good enough at present.

"The biggest thing was letting the fans down tonight," he told Sky Sports.

"We all did and that's not Arsenal at all

We thought we'd bounced back well against Manchester City and West Ham at home, but tonight that wasn't us at all.

It was an uphill battle towards the end.

"This isn't Arsenal in this moment in time

We thought we'd got out of this little rough patch before

Hopefully we haven't been dragged straight back into it, but judging on that performance tonight, it looks like we have.

"We go out on the pitch and we try to do a job, so we've let the manager down, like we have with the fans