That was the thought that sprung to mind during and after Sunday's 2-2 draw between Arsenal and Tottenham.

Matteo Guendouzi delivered his best performance for Arsenal in a frantic and breathless north London derby, and perhaps it was the ridiculously paced nature of the encounter that brought the best out of the Frenchman.

Whenever a high ball popped down from the glorious sunshine that engulfed the Emirates at the weekend, Guendouzi was there. The couple of occasions there was a loose pass asking to be intercepted, Guendouzi obliged. And when Arsenal needed someone to provide the creative spark to draw them level, Guendouzi provided it.

For all the Granit Xhaka and Lucas Torreira lovers out there, it might be a sobering thought that Guendouzi may currently be their best midfield option.

Xhaka is, well, in the kindest possible way, a walking dumpster fire. The lad made one tackle on Sunday and committed seven fouls, including the brainless lunge on Son Heung-min that gave Spurs their second goal. Arsenal have to choose more efficient players in central midfield if they want to assert themselves in games, rather than players who charge around the pitch and hack anyone in sight. Torreira remains a fine midfielder and a fan favourite at the Emirates, but Arsenal's relentless pressure began when the Uruguayan was substituted for the more creative Dani Ceballos. Far too often in the first half Arsenal's midfield was being bypassed and cut through by Tottenham's counterattacks, but the visitors' threat was reduced significantly when Torreira left the field and Guendouzi and Xhaka squeezed closer together in the second half.

Torreira is obviously not a lost cause like Xhaka, but Guendouzi's performance displayed the characteristics Arsenal fans have been crying out for in midfield for a long, long time, and his efforts showed genuine progress is being made in the red side of north London.

The 20-year-old was guilty of running around like a headless chicken in a lot of games last season, leaving onlookers wandering what his role in the team was.

But whilst it's important not to get too carried away with how well Guendouzi performed on Sunday, there's no reason to dismiss the possibility of him becoming a mainstay in the team and one of their important figures in the long-term.

Arsenal will be in transition for another couple of years - yes, that summer transfer window went swimmingly, but let's not get too ahead of ourselves here - and Guendouzi is evidently a player edging his way towards a regular spot in the team. If Unai Emery can match him up with someone who actually wins the ball when they tackle along with someone primarily tasked with creating opportunities, the sun might start shining a whole lot at the Emirates.

Because let's face it: Arsenal's front three is scary. Even if ​Alexandre Lacazette did a very cringeworthy, Daniel James-esque celebration after scoring his goal on Sunday, he's still a brilliantly creative striker, especially when matched with someone as clinical as ​Pierre-Emerick Aubameyang. Nicolas Pepe performed a few nice pirouettes, got an assist and would have given Danny Rose a lot more grief on another day, but the positive signs are there for all to see. 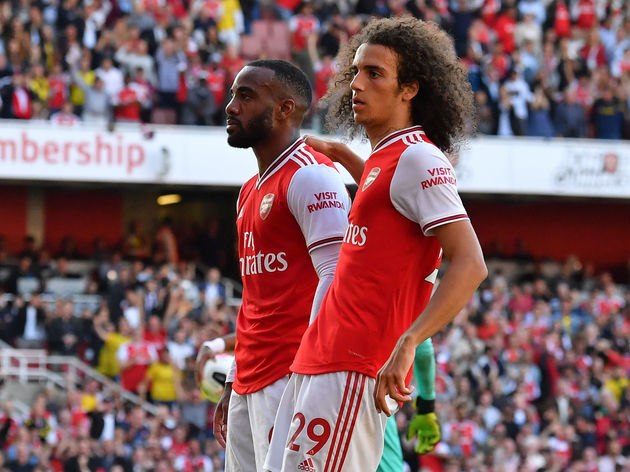 ​Arsenal probably would have won on Sunday had they not fielded two calamitous central defenders - any sense of positioning from either Sokratis or David Luiz was totally absent for the first goal - but the hope for Arsenal fans will be that more promising players can fill those roles when the oldies need to be weeded out.

They have one such starlet in Guendouzi - now they must build on that potential and gain something concrete from it.

(BTW, I'm actually a ​Tottenham fan, so to be totally objective and readjust the balance in this Arsenal love-in, I have to include this picture of Winksy running over Guendouzi during his one moment of weakness. Sorry, not sorry.)