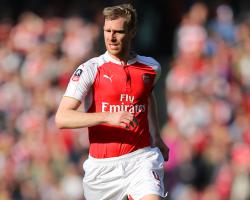 The Gunners have lost four of their last six games in all competitions, falling off the pace in the Premier League and facing a Champions League exit after losing 5-1 to Bayern Munich last month.

The Bundesliga giants travel to the Emirates Stadium for the return leg of their last-16 clash with reports of infighting and general discontent among the Arsenal dressing room and a growing apathy towards Wenger from the fans.

Captain Mertesacker could be involved in his first game of the season having recovered from a serious knee injury and he admits the players have let Wenger down of late.

"I think we saw on a lot of occasions that we were absolutely not ready for a fight," he said.

"That's what I want to see tomorrow, that we are up for a fight, to challenge something

We haven't competed a lot in recent games, we need to turn that around.

That is really something we are going to demand because we literally blew it away in the second half there (in Munich) and being in that position.

That is really something that we need the emphasis on."

Amid reports of Alexis Sanchez being involved in a training ground bust-up before being dropped for Saturday's defeat at Liverpool, Mertesacker said things are "tense" but that the players are all behind Wenger.

We had a real chance to go for it, to push it even without our best player on the pitch," he said.

"It's not always the manager

It's hard for him now to select, he does it with his best knowledge and we trust him

He has got a lot of options now

Tomorrow we have got a game to face that is really important to our team, not to one individual player.

"We have shown on many occasions that we can turn it around and we are happy to play for him, yes.

But you can feel in every training session that we are eager to change something about the situation.

"I am telling the players that we need to take the first step to get the fans on board again and to be successful again, we need our fans to back us up

We need to analyse very well and then come back with a stronger performance, and learn from the mistakes that we have made recently.

"The spirit is a bit tense, as I said, but that is normal in these circumstances."