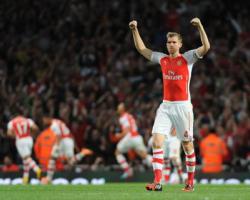 Arsene Wenger's 18th anniversary was marked in style with a hat-trick from England forward Danny Welbeck as Galatasaray were taken apart 4-1 at the Emirates Stadium, during which there was a first-half stoppage for flares thrown by the away fans to be cleared off the pitch and could lead to sanctions from UEFA.

The result puts Arsenal back on course for qualification out of Champions League Group D and was in stark contrast to that which came in Wenger's 1,000th match as Arsenal manager last season, when the Gunners were blown away 6-0 at Stamford Bridge during March.

German defender Mertesacker - who led the side against Galatasaray and will do again at the weekend with skipper Mikel Arteta sidelined by a calf problem - maintains this time around, things will be different

"Obviously (it is a) good lift (before the Chelsea game)

We have got good confidence at the moment and will try to implement that into the game on Sunday," Mertesacker told Arsenal Player.

"We know we can do better than the two consecutive seasons (at Chelsea) before and I think we will try new things on Sunday to get a better result than last year."

Arsenal will, though, be hoping for more of the same from Welbeck, the Â£16million deadline signing from Manchester United producing a clinical display to complete a first career hat-trick.

"He is the main threat at the moment, especially on the counter-attack," said Mertesacker of the 23-year-old, who along with Gibbs, midfielder Jack Wilshere and Alex Oxlade-Chamberlain have been named in the England squad for the upcoming Euro 2016 qualifiers.

"We have players who can put him in the right situations and that is what we need to find ourselves.

"It took a bit of time, but I think now we are on (the) spot and we see what it takes to be a team and to be fully integrated."

With France forward Olivier Giroud recovering from a fractured fibia, Welbeck is likely to lead the Arsenal line into the new year, by which time it is hoped Theo Walcott will be back in full swing after the seriuos knee injury which ruled him out of the World Cup.

Lukas Podolski has, though, seen his first-team chances limited, and the German international hinted he might force the issue when the transfer window opens again in January.

Speaking to RTL television, Podolski said: "I am a full-blooded player, a street player and I love competition.

"If I don't have this competition every weekend then a change must occur."

UEFA, meanwhile, will wait for the complete report of the match delegate for the Champions League Group D tie at the Emirates Stadium on Wednesday night before deciding what course of action to follow.

Galatasaray fans, whom had earlier caused disturbances in the local area before kick-off, threw several flares onto the pitch towards the end of the first half, when they were 2-0 down, which caused Italian referee Gianluca Rocchi to halt the game, with goalkeeper Fernando Muslera and captain Wesley Sneijder among those helping to restore order as riot police moved around the perimeter.

Metropolitan Police confirmed there had been six arrests as part of their operation for the European game, two of which were for entering the ground with flares.

UEFA view it as the home side's responsibility to search supporters for any illegal items before they come into the stadium, while the governing body could sanction Galatasaray for failing to control their own fans.