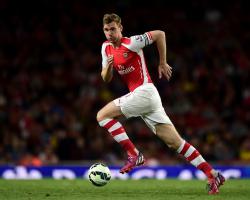 The Gunners saw their 10-match unbeaten run in the Barclays Premier League brought to an end by the Welsh side on Monday night after failing to take several chances before substitute Bafetimbi Gomis headed in a late winner for the visitors, which was given via the Goal Decision System.

Arsenal remain in third place, three points behind Manchester City, but with a game in hand, albeit with a far inferior goal difference.

Manchester United are two points further back, but would leapfrog the Gunners with victory on Sunday afternoon.

Mertesacker, though, feels Arsene Wenger's squad can take heart from their consistent performances since the turn of the year as they look to emulate their FA Cup quarter-final win at Old Trafford in March.

"You could feel the disappointment in the dressing room after the Swansea game, because we gave so much, but we are still positive," the German said.

"We still have a good level of confidence, so we are looking forward to the remaining games.

"It is very important (finishing in the top three) when you look at the schedule (for the start of next season), so we try to really avoid that."

Conversely, Arsenal could consign United to the Champions League play-offs with what would be a first league victory at Old Trafford since September 2006.

Mertesacker believes winning the midfield battle will be crucial.

They will want to keep the ball as much as possible," he said.

"Can we restrict that? Can we get the ball in their half and break? Francis Coquelin did really well in that role last time."

Wenger was left less than impressed by Swansea's approach, the visitors having sat back for most of the second half, but crucially converting one of only three chances on goal.

The Gunners boss, however, is expecting his side to produce the required response at Old Trafford on Sunday.

"We played against a team with a 4-6 formation, who didn't play and you are always frustrated when they manage to get away with a win," Wenger told Arsenal Player.

"On the other hand, we showed a lot of quality, but were not very good in our finishing and guilty of giving away a mistake (for their goal).

"It is (disappointing), but we should get encouragement because if we have done it for 10 games, we can do it again

We haven't lost our quality here, so let's restart on Sunday.

"Of course it makes that game important because the way you respond to a defeat always gives you a big (indication that) the team is strong mentally and that is what is expected of us on Sunday."