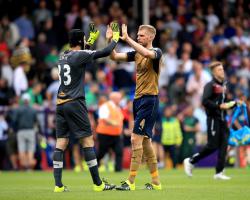 The Gunners delivered the desired response from defeat on the opening day at home against West Ham with a solid performance against the Eagles on Sunday afternoon.

After taking an early lead through Olivier Giroud's fine acrobatic volley, Arsene Wenger's side were pegged back by a 25-yard strike from Palace defender Joel Ward.

Arsenal weathered the storm to regroup after Palace hit the woodwork at the start of the second half and went on to restore their grip on the game when Alexis Sanchez's header was deflected into his own net by Palace captain Damien Delaney.

Mertesacker, who again captained the side at Selhurst Park with club skipper Mikel Arteta on the bench, was heavily critical of the squad's collective below-par performance against the Hammers.

The 6ft 7ins German centre-back admitted there had been some stern words at London Colney this week, which helped the players regain their focus, and victory lifted the mood ahead of the visit of Liverpool next Monday night.

Asked if he felt there had been a need to address the team's shortcomings directly, Mertesacker told Press Association Sport: "Obviously when everything goes very smooth in pre-season, you avoid those talks which are sometimes very important.

"That (the need for those talks) was the case last week when w e came out of the (West Ham) match where no-one knew exactly what we did, so we just had to come back to our game

"You could already feel something when you are in the relegation zone (in the table), and not having (produced) in that (West Ham) game what everyone expected from you, so it was important to bounce back.

"Against Palace, it was good possession, to play the ball through the midfield and penetrate them.

"Later (in the game) we made it difficult for ourselves, but overall it was a very encouraging performance from top to bottom.

"We were dominant and that was the key to our success.

"We were good on the break, good in the combinations, there is a lot more to come from us, that is what we need, that is our game and we need to count on that."

Palace worked hard to get back into the match, and were somewhat unfortunate not to have taken the lead early in the second half when Connor Wickham's close-range effort struck the post.

Eagles boss Alan Pardew lamented the decision by referee Lee Mason not to send off Arsenal midfielder Francis Coquelin for what could easily have been deemed fouls worthy of a second caution before the player was eventually substituted just after the hour.

Defender Ward feels there are plenty of positives for the Eagles, who won at Norwich on the opening weekend and next host Aston Villa.

He said: "Arsenal had a point to prove and we were probably a victim of our own mistakes.

"At spells we played good football and moved the ball well, but if you make mistakes against top teams, you get punished.

"So we have to learn from that and learn quickly, starting next week to put it right.

"We have more than enough

We will definitely win more than we lose this season for sure."