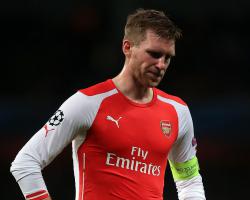 The Gunners' ambitions of making it through to the quarter-finals of Europe's elite club competition for the first time since 2010 have been all but extinguished following a text-book away performance from the Ligue 1 side, who made Arsenal pay for some poor finishing and a gung-ho rearguard action with a 3-1 victory at the Emirates Stadium.

Arsenal had failed to build on a positive start against the unfancied principality side, but were chasing the game following a 25-yard deflected effort from Geoffrey Kondogbia and then former Tottenham striker Dimitar Berbatov hit them on the break.

The tie, though, looked to be still alive after a fine stoppage-time, curling, 18-yard effort from substitute Alex Oxlade-Chamberlain only for Arsene Wenger's side to shoot themselves in the foot again, caught out pressing for a dramatic equaliser as Yannick Carrasco rolled a potentially fatal third into the corner past the gloves of David Ospina with almost the last kick of the match.

Manager Wenger, who did not enjoy a happy reunion with the club he guided to the French title in 1988, criticised the mentality of his players for failing to limit any further damage.

Mertesacker accepts Arsenal's troubles are all of their own making, the 6ft 7ins German having been one of those caught out of position, but believes all is not yet lost ahead of the trip to Stade Louis II on March 17, when they will have to score at least three against a team who had conceded just two in 17 matches before Wednesday night.

Asked by Press Association Sport if he felt Arsenal had it within them to produce a miracle result, Mertesacker said: "We have seen a lot of miracle nights in all competitions

European nights can be very frustrating, but they can also be wonderful

We need a wonderful night.

"We try to create a special atmosphere with our travelling fans

We are capable of doing special things, even away from home.

"Let's try to raise everyone's level at Monaco, try to get in our rhythm there.

"We could have scored more than three goals (in the first leg) and we can hurt them.

"We have to focus on that

We can't look back and think too much about this game.

"We will analyse what went wrong, but when we travel to Monaco we have to be on the front foot, be brave and get the best out of ourselves."

Mertesacker accepts Arsenal must quickly learn from their shortcomings against Monaco if they are to sustain a challenge in the Barclays Premier League, with Sunday's visit of Everton and then a trip to relegation battlers QPR coming ahead of the FA Cup quarter-final at Manchester United.

"When we came back there was a bit of hope with the goal we scored, but we tried to get the second," he said

"When you're 2-1 down, you think you can maybe score another one, that is what we thought

We were really up for the second one.

"I agree it was a hugely disappointing night, you could feel that after the game in the stands and in the dressing room, but there is still a small chance (to qualify).

"We are not happy with our performance as a team but we tried to fight back.

"We still have hope to come back even stronger from that disappointment."

Theo Walcott came off the bench in the second half to inject some life into the Arsenal attack.

Following the final whistle, the England forward was photographed making a gesture to some fans as he swapped shirts with Monaco defender Aymen Abdennour, indicating their criticism of him fell on deaf ears.