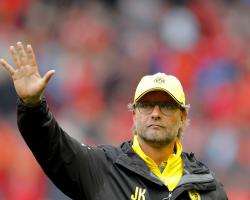 Klopp, 47, announced earlier this week that he would end his seven-year stint at Borussia Dortmund when the current season draws to a close, prompting fresh speculation that he could head for the Premier League.

Manchester City have already indicated that a man who has also been linked with Manchester United and Arsenal in the past, is not in their sights, but Germany international Mertesacker insists Klopp would be a good fit in the English top flight.

I think his passion would fit and to see him in England would be very interesting.

"Everyone has their philosophy and I think Jurgen Klopp has proved that he's top-level and can teach a lot."

However, Mertesacker insisted Klopp, whose side are 10th in the Bundesliga table, will need time to decide on his future after a largely successful spell in Dortmund which has brought two league titles and a Champions League final appearance.

He said: "I think he should just finish the season with Dortmund and then he should be given time.

"We'll see what he does next, but I think he's fought his way out of all situations and I think that this time he will find a path that gives him a new challenge.

"But firstly, I wish him all the best and time to think about his achievements

I think you should give him time - and I wish him all the best."

But for all that a new challenge lies ahead for Klopp, Mertesacker admits he cannot work out what has gone wrong to prompt his exit from Borussia.

He said: "It is obviously sad news for Borussia Dortmund, [he was] such a passionate successful and passionate manager for them

He was the guy who turned it around at Dortmund.

It is a sad situation.

"But in the summer, it will be a new situation for him

Maybe he is going to go abroad and see how it goes there.

"I would love to see more German managers abroad, because it is obviously a new challenge, to adapt to the culture, the language, the system

"It is his decision

He worked really hard and pushed really hard, so even if he said he is not tired, maybe he takes a bit of breather to fuel his energy and his batteries?

They went to the Champions League final

It will be interesting to see what happens in the summer."