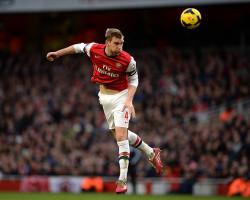 The Gunners remain top of the Barclays Premier League by just a point after Manchester City were beaten 1-0 at home by Chelsea on Monday night.

Arsene Wenger's men, though, are now set for the toughest of schedules, which sees them head to Liverpool for Saturday's lunchtime kick-off, then host Manchester United before Brendan Rodgers' side come to the Emirates Stadium in an FA Cup fifth-round tie on February 16 - just a few days ahead of the Champions League visit of holders Bayern Munich.

Arsenal are hopeful England midfielder Jack Wilshere will be available after a minor ankle problem to boost numbers at Anfield, with Mathieu Flamini serving a three-match suspension, Aaron Ramsey sidelined by a recurrence of a thigh injury and deadline-day signing Kim Kallstrom several weeks away from full fitness due to a back problem.

While Wenger's squad may be fully stretched, Germany international Mertesacker believes they can all pull through.

"It is that part of the season when you might feel tired or exhausted, but we have to keep our chins up and now the really important games are coming," he said.

"We have interesting games in the FA Cup, Champions League and Premier League.

"We have played well this season so far, and we have to keep that level (up)."

Arsenal recorded a seventh clean sheet from 10 matches with a 2-0 win over Crystal Palace on Sunday, with a second-half double from midfielder Alex Oxlade-Chamberlain.

Much of that defensive solidity is down to the growing partnership of Mertesacker and France international Laurent Koscielny, with Arsenal having not lost a game which both men have completed since the end of January 2012.

The consistency of the duo has seen first-team chances for captain Thomas Vermaelen limited, the Belgian currently sidelined by a slight calf strain following his recovery from a knee problem.

Mertesacker, though, says their skipper remains an integral part of the defensive unit.

"I think we have shown a lot of people who criticised us a lot over the last two-and-a-half years that we know each other much better now and that we complement each other well, so it looks like that's a good partnership (with Koscielny)," he said to Arsenal Player.

I think when I speak about our centre-backs I want to include always Thomas Vermaelen because he's our captain and he's always vital for everyone.

"He's aware of situations, he gives us a boost, he came back from a heavy injury.

"The boss will rotate in the next couple of months and it's really important that we are all in good fitness and all in a good shape so we can continue our good form and good partnerships with the three of us."

Meanwhile, Liverpool fans' group 'Spirit of Shankly' have expressed their disappointment at a reduced allocation for the FA Cup tie, down to 5,168 because of safety concerns "from supporters standing in the upper tiers of the stadium".

The match had been designated a 'category B' fixture by Arsenal, which saw admission costs set between ?35.50 and ?54 for the televised tie.

A Spirit of Shankly statement read: "In our letter to both clubs last week, we made clear that as well as reduced ticket prices and consideration being taken for the impact on supporters' travel arrangements with regards to any proposed kick-off time, that we wished to be given the full 15% allocation in line with FA rule (21(a)).

"This would amount to approximately 9,000 tickets, somewhat higher than the announced allocation

As a result, we have immediately re-written to both clubs today to ask them to explain this decision."