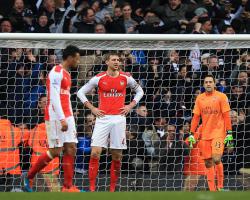 The Gunners had looked set for another positive away performance when they snatched the lead through a fine volley from Mesut Ozil after 11 minutes.

However, Spurs soon regained momentum as Arsenal struggled to deal with the impressive midfield work-rate from Mauricio Pochettino's men.

The industry of the home side was rewarded when Harry Kane swept in an equaliser as he ghosted in unmarked at the far post when Arsenal failed to deal with a corner at the start of the second half.

Just when it seemed Arsenal had done enough to maintain their recent unbeaten run, another lapse in concentration at the back allowed in-form Kane to get between Laurent Koscielny and Nacho Monreal to head home Nabil Bentaleb's deep left-wing cross.

Arsenal - who had won five successive matches ahead of Saturday's poor display, including a battling victory at Manchester City - find themselves below Spurs in sixth place in the Barclays Premier League and must now regroup quickly for Tuesday night's visit of bottom club Leicester to keep the pressure up on the top four.

"We found a way recently to prepare ourselves on crosses better defensively (and also) on set-pieces, but we did not switch on quickly enough and were not up for proper defending, so that was worse than in recent weeks," Mertesacker said on Arsenal Player.

"We were not active enough and only started to play our game a bit towards the end, that took us too long

"When we had the ball, we could not find any solutions, they were always at us and we could not get the ball quickly in our own half so we could not hurt them on the counter-attack."

The German, who is captaining the side with midfielder Mikel Arteta still injured, added: "We have to analyse the problems they caused us, then we focus on Tuesday to bounce back from this setback as quickly as possible."

Gunners boss Arsene Wenger accepted his side paid a heavy price for "too many technical mistakes in the middle of the park" and was also less than impressed at the way Spurs crafted a late winner.

He said: "(For the second goal) Kane had a completely free header in the box, with five minutes to go, that is difficult to understand with the experience we have at the back.

"I am disappointed by the quality of our football and it was just not good enough."

Arsenal are expected to have leading scorer Alexis Sanchez back from a hamstring problem on Tuesday, while Theo Walcott is pressing for a recall having been left on the bench as fit-again Danny Welbeck started at White Hart Lane.

Wenger maintains Leicester will be no pushovers, despite being rooted to the foot of the table after a third-straight league defeat when beaten 1-0 at home by Crystal Palace, if his team do not produce the required performance.

"We play at home against Leicester, a team who fight not to go down," said Wenger.

"We have to recover from the disappointment and be ready to respond very quickly."