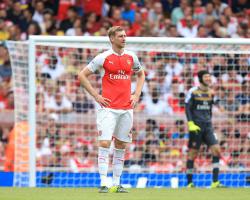 Arsene Wenger's men were beaten 2-0 at home by West Ham on Sunday, with summer signing Petr Cech enduring an Arsenal debut to forget after the former Chelsea goalkeeper flapped at a free-kick which Cheikhou Kouyate headed in, before being left wrong-footed by a low effort from Mauro Zarate in the second half

The Gunners had gone into the new campaign with fresh hope for a sustained title challenge following some impressive displays in pre-season, which culminated with victory for the FA Cup holders over defending champions Chelsea at Wembley

"We can only blame ourselves for Sunday's game

Hopefully we can come back from that disappointment

It is a bad start, but sometimes you need a bad start to come back and realise that you have to give more than just what we did," said the German centre-half, who again captained the side with Mikel Arteta on the bench

"They didn't create too many chances, but overall we were not decisive enough, especially in the final third

It looked like the last ball was always the wrong decision."

Mertesacker knows the Gunners cannot afford to lose any early ground on their title rivals, which proved so costly last season

He continued: " We want to have a better start than last season so we need to be very cautious of the situation, to start with a game like that is not good, but to bounce back is even more important now

"We played a great pre-season, but that is absolutely nothing

I have said that before already, especially after the Community Shield game

"It is a massive loss for us because we had great confidence and now it is time for us to settle down, stay healthy and look forward to next Sunday."

Forward Alexis Sanchez could be in contention to start at Selhurst Park having been a surprise inclusion on the substitutes bench against West Ham after only returning from an extended holiday after Chile's Copa America success at the start of the week.

Striker Olivier Giroud, meanwhile, is understood not to have been unconscious at any time following a clash of heads with Irons defender James Tomkins during the second half on Sunday, which caused the game to be stopped as both players received treatment from medical staff.