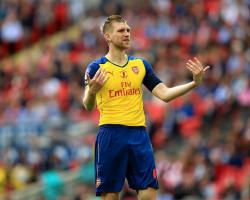 The Gunners will continue their pre-season campaign by hosting the Emirates Cup this weekend, having returned to London following a successful trip to the Barclays Asia Trophy Singapore, where they defeated Everton 3-1 in Saturday's final.

With veteran goalkeeper Petr Cech having quickly integrated himself into the squad since a ÃÂ£10million summer transfer from Chelsea, there is a growing belief around the Arsenal camp that there can now be a long-overdue sustained assault on the Barclays Premier League.

Mertesacker, however, knows to achieve that, Arsene Wenger's side cannot afford to make the slow start they did to last season, which produced only two wins from the opening eight Premier League matches, before signing off as the form side of 2015 on the way to securing third place and then lifting the FA Cup again at Wembley.

"We need to be at our best

We want to extend that and show that we are real title contenders from the start, not only in the second half of the season," the German told Arsenal Player.

"We want to be ready right from the start and not getting as many injuries as last season would be lovely and good for us.

"The belief is still there - we always had a certain belief in ourselves - and to win trophies back to back is something special, but let's add that little extra to be a competitor for the whole season."

Mertesacker believes Wenger has assembled a squad now capable of holding their own against the likes of Chelsea and the Manchester clubs.

He added: "We have a good structure and a good base

We will try to build on that

"We have a good squad, we won't lose key players, so that's good consistency

We have to be because there are plenty of competitors for the title."

Arsenal will face Premier League champions Chelsea in the FA Community Shield at Wembley on August 2 before the new campaign begins at home to West Ham a week later.

By then, Chile forward Alexis Sanchez is expected to be back training at the club, having been given an extended holiday following the Copa America.

Wenger indicated he continues to be in the market for another high-calibre addition, with both Real Madrid's Karim Benzema and Borussia Dortmund's Gabon international Pierre-Emerick Aubameyang reported targets