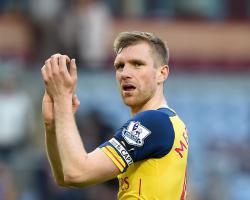 Arsene Wenger's men, who play Swansea on Monday night, are also in the FA Cup final as they bid to retain the trophy which ended a nine-year silverware drought last term against Aston Villa on May 30.

Asked how Arsenal can bridge the gap to Chelsea, who won the title with three games to spare, Germany defender Mertesacker said: "Consistency

It's all about that.

"That is really important to get that going for more than six months."

Arsenal last lost in the Premier League to Tottenham in early February and their Champions League loss to Monaco is the only other defeat since.

The Gunners have lost six times in the league this term, including at Swansea in November, while Chelsea have lost only twice.

Mertesacker is determined that the fine run continues until the end of the season, to secure direct qualification to the Champions League group stages and to carry momentum to Wembley.

"The championship has gone now

"The second spot is open and we're one contender for that

To avoid the fourth spot is a target.

"To focus on the next game is the most important thing, but when you look forward to the FA Cup final you want that momentum and that strong run going until the last day of the campaign.

"We are in a really good mood

The atmosphere's great at the minute

We're on a winning run and try to continue that.

We're playing good football and that's what counts at the moment.

"We want to continue that

Monday night game under floodlights is a good one for us.

"Swansea have done so well this season

When we went to Swansea we lost there

We need to improve our game."

Mertesacker was speaking at the launch of the Arsenal Hub, the home of Arsenal in the community adjacent to the Emirates Stadium.

The facility, which includes a 50metres x 18m 4G artificial pitch, classrooms and office space, will provide over 50 hours of community use to 1,500 Londoners per week.

"It's (using) football to get a connection to the kids, try to fulfil their potential," added Mertesacker, who runs his own community programme in Hannover.

"It's exciting for us as players

Now we know what's going on here, with 50 projects.

To give something back to the community is what we need to do."