Mertesacker- We can respond to pressure 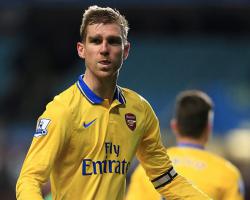 The Gunners held off a late rally from the home side to reclaim top spot in the Barclays Premier League with a 2-1 success at Villa Park on Monday night.

Coming after the rest of the top six had won their matches over the weekend, Mertesacker echoed the thoughts of manager Arsene Wenger that the result had been the perfect response to growing pressure.

The German defender, who captained the side and was outstanding on the night, said: "All the teams in the top seven won, no-one dropped any points.

"There was a bit of pressure, the team could feel that, but we responded. I think everyone was expecting at home that we may drop points.

"That was very important, to let the other teams see that Arsenal are alive and that we can respond.

"We look at ourselves and think we are good enough to respond to any challenge they give us.

"It was a strong one, they gave us a good task, but we gave them a little idea of what can happen."

Mertesacker said: "It is really tight at the top.

"There is no chance to drop any points, so we have to show the other teams that we can feel the pressure but we can respond.

"That is really vital. We are really happy with the fighting performance and how resilient we are."

Arsenal were comfortable in the early stages and although Villa briefly started to make an impression midway through the first half, two quickfire goals put the visitors on course.

England midfielder Jack Wilshere showed superb technique to control and fire home the opener at the end of a slick counter-attack in the 34th minute.

Less than 60 seconds later he underlined his class again as he seized possession from Fabian Delph and lofted a fine pass for Olivier Giroud to smash home the second.

The Gunners then seemed to be well in control and cruising towards victory until Christian Benteke headed home his first goal in four months to set up a frantic finish.

Arsenal held on and Mertesacker felt coming through that test was character-building.

The 29-year-old said: "We kept going, especially in the first half, when we did extremely well.

"We put a lot of pressure on them, took the lead by the two goals that were decisive.

"I think that was our own fault when we conceded that goal. We felt a bit too secure at one point.

"Overall I think it was fully deserved, but I think we could have played better in the second half, especially on the counter-attack.

"There was a lot of sloppy passing, and that is what we don't expect from us.

"But we managed to defend well until the end, and that is another attribute we have learned this year - to keep focused until the last moment."

Mertesacker had been making his 100th appearance for the club but that was not something he was overly keen to celebrate.

He said: "Not really - it is good to be in the team at the moment.

"We are on a fine way and we need to keep going.

"It is not too important that a single player got his century."

Mertesacker, signed from Weder Bremen on transfer deadline day in August 2011, is in talks with Arsenal over extending his contract, as is full-back Bacary Sagna, whose current deal expires in the summer.

The scenario is the same for Gunner boss Wenger, although the 64-year-old maintained at the weekend there was "no big major doubt" over the negotiations, with reports a positive conclusion could be announced shortly.