​Mesut Ozil vented his frustrations during Arsenal's 1-0 defeat to Everton on Sunday by throwing his coat at Everton staff during a touchline row between Unai Emery and Marco Silva.

The Gunners succumbed to a defeat at Goodison Park which comes as a blow to their top four hopes, after an early strike from Phil Jagielka was enough for the home side to record their third consecutive Premier League win.

​Arsenal struggled to find a foothold in the game, with ​Ozil substituted with 15 minutes remaining after being unable to inspire a fightback from his side. As reported by ​The Sun, the playmaker found himself more heavily involved in the action off the pitch.

​Everton boss Silva engaged in a heated dispute with Arsenal's Emery on the touchline after the pair disagreed over a foul committed by the visitors on Dominic Calvert-Lewin, as Shkodran Mustafi floored the Toffees striker as he looked to break clear of the Gunners' defence.

The German was only shown a yellow card for the foul, and the incident sparked a disagreement between the two dugouts, in amongst which Ozil was seen hurling his coat at Everton's coaching staff. 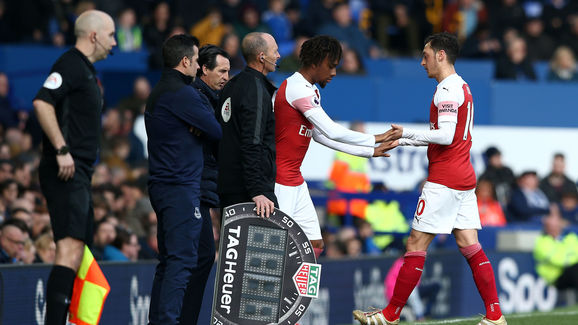 One supporter said of the incident via Twitter: "Certain man says Ozil isn't passionate. Literally threw his coat from the bench to the sideline in frustration. My captain."

Another said: "Anyone seen Ozil??? First time I saw him today was when he threw his coat."

The defeat leaves Arsenal fourth, ahead of ​Chelsea only on goal difference, and a point behind bitter rivals ​Tottenham in third, meaning that the Gunners are still well-positioned to secure a top-four finish, but Emery's side must improve their away performances after Sunday's defeat.