​The Mesut Ozil saga at Arsenal continues apace as a new report claims that the German star could move to a Major League Soccer side. However, the German playmaker will not put in a transfer request to force through the switch.

Ozil was left out of the squad entirely as Arsenal laboured to a 3-2 home victory over Vitoria in the Europa League on Thursday.

The World Cup winner has had his run-ins with Arsenal manager Unai Emery, and despite being part of Arsenal's group of five captains, he has started just one game in all competitions this seasons this season.

According to ​Bleacher Report those close to Ozil are trying now to convince him to force through an exit from north London, with a big-money move to America possibly in the offing.

With Zlatan Ibrahimovic set to leave at the end of this season, LA Galaxy could offer Ozil a new home, as the MLS side look for a fresh marquee signing to follow the path worn by the likes of Ibrahimovic, Steven Gerrard and David Beckham.

However, according to the report, the Arsenal number 10 has insisted that he is keen to see out the rest of his £350,000-a-week contract at the Emirates, which expires in 2021. It therefore seems unlikely that he will put in a transfer request to make the move to America happen. Ozil remains a popular figure at the Emirates and, during the Gunners' victory in the Europa League on Thursday night, fans could be heard chanting Ozil's name.

Away from MLS it would appear that the German still has admirers in the Premier League.

Speaking after his former side's ​1-0 victory over Partizan Belgrade in the Europa League, ​Manchester United legend Paul Scholes said that Ozil is the profile of player the Red Devils should be looking to bring into Old Trafford.

Scholes is quoted as saying: "I can’t understand that [Ozil's situation at Arsenal]. I think he’s a player that can link a team together. 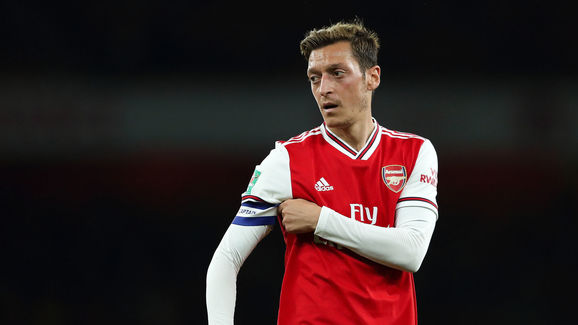 "I think he’s got great quality, he’s shown that in his career, he could be an answer short term, I don’t know. I think that would be up to him."

Earlier this month, there were also reports that ​Ozil was being targetted for a January move by Turkish heavyweights Fenerbahce.