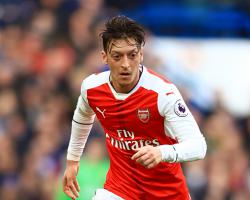 The Gunners were thrashed 5-1 home and away to exit 10-2 on aggregate last month, crashing out at the last-16 stage for the seventh year running.

That result, along with a string of underwhelming domestic displays which have left them seventh in the Premier League, has seen pressure mount on Arsenal manager Arsene Wenger.

The Frenchman's contract expires in the summer and it is still unclear whether he will sign a new deal at the Emirates, while Germany midfielder Ozil and forward Alexis Sanchez have just over a year remaining on their existing deals and have been linked with moves away.

However, while admitting that Arsenal's humbling at the hands of the German champions was a career low point, Ozil also sees it as a chance for the Gunners to improve.

"The devastating loss at Bayern Munich this season is undoubtedly one of the darkest hours of my footballing career," Ozil says in his book 'Gunning for Glory', which is being serialised in the Mail on Sunday

"We were positively prepared for the game

Arsene Wenger had revealed to us his game plan

He was very clear about his ideas - and they were good ones.

"Our intention was to go all out for Bayern's central defender Mats Hummels; to prevent him from opening up the game which he does so brilliantly

We wanted to force him to play the ball to Javi Martinez, who's also a fine central defender but who isn't great at opening up the game.

"In this way we hoped we'd be able to stop Bayern from building up the play at an early stage and disrupt their rhythm.

I could look for excuses

But I'm not going to

What went on between us in the dressing room after the match is nobody's business, n or is what Wenger considered our failures to be in his post-match analysis

"The fact is, we all failed

We were all bad! We played a game that held a mirror up to our faces

"It was a performance we can't just brush aside

No, we have to learn our lessons from it

All the players, all the trainers, even the management

Because this fiasco also represents a great opportunity!

But I've always got up again and won victories and titles following the defeat ..

this defeat by Bayern will produce something good at the end, too."