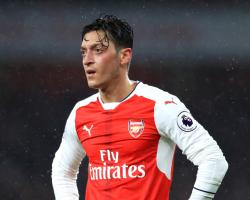 German playmaker Ozil indicated in January that he wished to know what Wenger would be doing at the end of the season before committing to a new contract.

Arsenal's French manager reaches the end of his current deal in the summer and has yet to commit to staying.

Following a poor run of results there have been calls for Wenger to make way for a new manager, after a near 21-year stay at the club.

Ozil has a year remaining on his own contract, and told German newspaper Bild am Samstag that renewal talks were on hold.

He said: "T here were talks with the Arsenal management

However, I am currently concentrating on the current season, just like the Arsenal management."

On Wenger, the 28-year-old said: " I've always said that I feel good at Arsenal: the club, the fans, the city - it's all here

"Therefore it would be wrong to say that my future only depends on the manager."

Ozil said he finds London "incredibly interesting" and added: " I can imagine living here after my career

Perhaps splitting my time between London and Germany."

And despite suffering more Champions League disappointment, with the 10-2 aggregate last-16 defeat to Bayern Munich, Ozil still dreams of the day the north London side conquer Europe

He said: "You are never satisfied as an athlete

You need this motivation

I would still like to win the Champions League one day