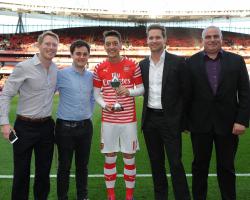 Featuring in 15 Premier League games since January, including 9 wins and 3 draws.

Ozil played the 73 minutes of the 4-1 victory over Liverpool at the start of April and managed to get on the scoresheet as well as providing one assist.

The German followed this up with a solid performance in the 1-0 victory over relegation threatened Burnley at Turf Moor.

Arsenal are currently third in the league ahead of SundayÃâs final game of the season against West Brom.