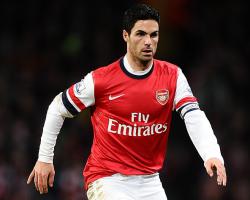 While many pundits had confidently predicted a new year collapse, the Gunners trail leaders Chelsea by just a point heading into the final dozen matches of the campaign, although third-place Manchester City hold a game in hand.

Much had been made of Arsenal's lack of attacking back-up for main frontman Olivier Giroud following the season-ending injury to Theo Walcott, but Arsene Wenger certainly has plenty of options in a supporting role.

Arteta had returned to the starting XI in Saturday's 4-1 win over Sunderland following suspension for the Champions League defeat by Bayern Munich, with Mathieu Flamini on the bench.

Wales midfielder Aaron Ramsey, who had been in sublime form before a thigh injury sidelined him on Boxing Day, is close to a return - all of which will bolster Arsenal's selection choices for the run-in.

"It helps the team because we can rotate players and we can play differently," Arteta said on Arsenal Player.

"We can play with two [in midfield] and it gives us another option.

"No-one has been able to play every game this season

I think the league is getting more demanding, you need a big squad, you can't afford to have only 11 players."

To kick off, there is the FA Cup quarter-final against Everton followed by the return leg of their European tie in Germany, not to mention the north London derby on March 16 before showdowns against title rivals Chelsea and Manchester City.

A trip to Stoke's Britannia Stadium is hardly the ideal preparation for a run of games which is likely to shape Arsenal's season.

Midfielder Jack Wilshere, though, maintains the Gunners are ready to meet those challenges head on.

"We know what to expect

Stoke away is always a tough game," said Wilshere.

"We have to again press them high up the pitch and try to deal with the long balls they are going to play, so when we get the ball, we have to play."

Club record signing Mesut Ozil is expected to shake off the dead leg which kept him out of the Sunderland game, having been given some extra time away to recover.

However, Laurent Koscielny (back) and Nacho Monreal (foot) are expected to be over minor knocks by this weekend.