Down to 10 men in the first half after a wayward pass from Shkodran Mustafi left teammate David Luiz with no choice but to bring down Tammy Abraham from behind, Arsenal twice came from behind to claim a share of the points. 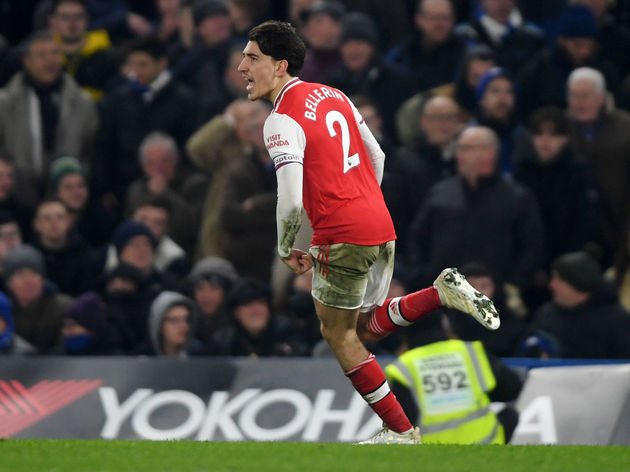 A fine solo goal from Gabriel Martinelli cancelled out Jorginho’s penalty. But when Cesar Azpilicueta scored with only a few minutes remaining Chelsea looked on course to win, only for skipper Hector Bellerin to secure a 2-2 draw with a curling left-foot shot into the far corner.

The draw was Arsenal's 12th of the season, but impressed Arteta greatly - with the Spaniard telling Arsenal.com the positives he would be taking away from the display.

“The spirit they showed, the character, the fight and the leadership was there as well,” Arteta began. “You have to really stand up. When someone [Mustafi] makes a mistake, it can happen in football, so someone [Luiz] has to take a red card for him. It can happen.

“What cannot happen is that afterwards we don’t stand up for him. Every single player did it with belief as well. I could sense it at half-time that they believed they could get back in the game.

"I wasn’t expecting Hector to score with his left foot obviously, but I’m very pleased.”

Martinelli was once more a star for Arsenal, while 18-year-old Bukayo Saka filled in at left-back again. The Gunners also brought Matteo Guendouzi off the bench early in the second half, while Joe Willock got on the pitch in stoppage time as well.

The emphasis on youth may well be an insight into Arsenal's future, with Arteta adding that these kind of games are a great learning curve for his young players.

“We’re playing with a lot of young kids and what they’ve shown tonight is going to be a great experience for them, to keep believing that in football if you put everything in, anything can happen. In that sense, it’s top,” Arteta added.