Arsenal were certainly not at their best on Saturday against West Ham United, but they still managed to come away on the winning side after Alexandre Lacazette poked home from close range late in the game.

The Hammers had several guilt-edged chances throughout the game, but a combination of poor finishing and a dominant performance from Bernd Leno thwarted them time and time again.

Arsenal held on and eventually walked away with all three points, carrying them up to ninth in the Premier League table, and here's what Arteta had to say after the game.

On the Importance of the Win "I don’t believe a lot in fortune, we had the moments of luck that we needed, but as well it was because we had some really good individual performances at the back. Sometimes to clear the ball and sometimes to make a save.

"I’m really happy with the result because big teams find a way when they don’t have the best day. It’s obvious that it wasn’t our best day in terms of performance, but they find a way to win it. You can build from there, you can learn and take the positives and the negatives in a much better way.

"The unity, the solidarity and desire the players are showing, at the end it pays a price, and today we didn’t pay a price. A few days ago we played Olympiacos here but it did today and football is like this."

On VAR's Decision to Allow the Goal

​Lacazette's goal was initially ruled out by the officials after ​Mesut Özil was deemed to be offside in the build-up, but after a thousand years of waiting, VAR stepped in and allowed the goal.

"When the goal was disallowed I thought ‘okay that’s fine’. Then my staff came from the bench and said ‘it’s a goal’.

"But then after two or three minutes, I don’t know how long, then I wasn’t very positive about the outcome. I am very pleased with the VAR tonight.​"

In the league, ​Arsenal's last loss came against ​Chelsea on 29 December, so victory over ​West Ham stretched their unbeaten run to eight games.

"It’s only turning a corner in terms of results. A little bit in terms of the things I want to see from my team, but they were telling me now that ‘I’ve turned the ship around’, that ship still has to turn a few times more to see what we want to see.

"It’s part of the process, it doesn't happen overnight, we are positive that we can keep going on this from the eight or nine weeks that we’ve been here. It will be down to the performances that we put in and it will be related to the results."

On a Poor First-Half Performance 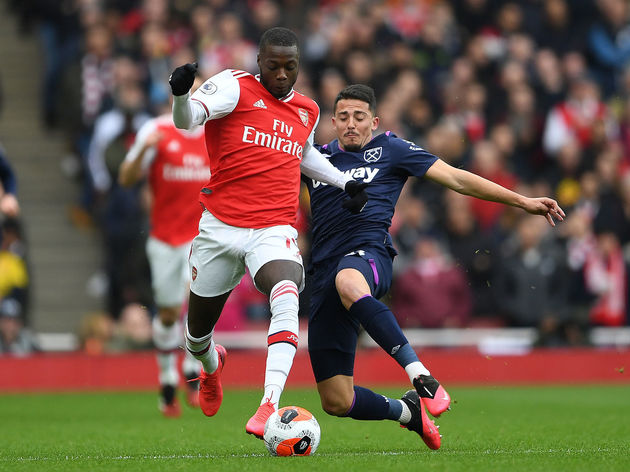 "We had moments, obviously in the first half when teams are so compact and defend with that deep block – we gave a lot of simple balls away in dangerous areas, where we allowed the opposition to generate transition moments which they are good at.