​Arsenal right back Héctor Bellerin did not start his side's 1-0 win over West Ham on Saturday as he continues to struggle with various injuries.

The Spaniard has endured a challenging year when it comes to fitness. He ruptured his cruciate ligament in January 2019 and was out of action until November, but managed just three league appearances before picking up a fresh hamstring injury. Bellerin overcame that issue and completed 90 minutes in four consecutive games, but was dropped to the bench for Saturday's match. Rumours emerged that perhaps manager Mikel Arteta was not his biggest fan, but ​The Athletic's David Ornstein has revealed that his absence was due to injury.

His latest struggle is understood to be a minor groin tear which he suffered midway through February, but ​Arsenal have given him a heavy diet of painkillers to try to keep him available as much as possible.

However, he still needs time to rest, which is why he was dropped from the recent squads to face Portsmouth and Olympiacos, and it was decided that Bellerin also needed to sit out the majority of the ​West Ham game.

This injury must be pretty nasty. If Arteta thinks playing Sokratis Papastathopoulos at right back is the answer to anything, then things must be really dire.

Bellerin's injury is believed to be impacting his crossing ability, but are you really trying to tell me that Sokratis' crossing was Arsenal's next best bet? They really need Cédric Soares fit as soon as possible.

Arteta was fortunate to get away with it, with West Ham unlucky not to come away with at least a point from the game, but he will hope that Bellerin can return to face ​Manchester City on Wednesday so he doesn't need to risk turning to Sokratis again. 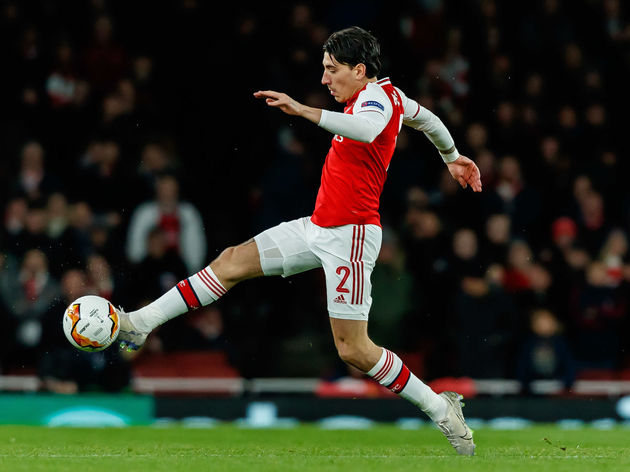 The result saw Arsenal climb up to ninth in the league table, and they are now eight points behind ​Chelsea in fourth.

The Gunners do have a game in hand over their cross-town rivals, but unfortunately for them that comes against City, so three points are far from guaranteed.