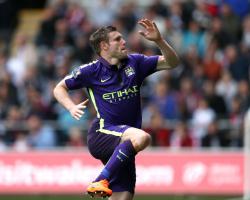 According to the Star, City are looking at offering a generous four-year deal worth an incredible ÃÂ£165,000-per-week with extra bonuses and incentives on top

ItÃâs a deal that would put Milner in the elite bracket of Premier League earners and only behind Aguero and Toure at the Etihad.

With further talks with his agent Matthew Buck scheduled for next week it is understood that Milner will make a decision on his future after that.