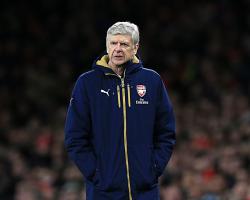 The Gunners were met by boos from frustrated fans as they saw their side unable to beat Saints goalkeeper Fraser Forster, despite 11 shots on target.

Wenger said: "We produced quite a good performance, especially in the second half when we created 10 goal chances.

"At the end of the day we came out with no goals.

"I believe the performance we wanted to produce was there, but we cannot be happy with the way we finished our chances.

"I think what's most disappointing is some players missed some chances that usually they would take.

At that level it's important."

Arsenal were the only team in the top six of the Premier League who failed to win on Tuesday night, and Wenger was frustrated at the result because he knew his side could do better

He said: "We started slowly but in the first half, a bit nervous because we lost our last game at home but in the second half it was one-way traffic.

We didn't make enough of our set pieces, we didn't take them well, we didn't finish well

"It's just that our finishing was very poor.

"It's maximum frustrating, when your team puts the energy in and creates the chances.

Southampton manager Ronald Koeman was delighted to keep a clean sheet at the Emirates Stadium but he believes his players were not at their best in the match despite Forster's impressive performance.

He said: "Normally we are defending better than we were but the season is difficult, we have got the confidence back.

"It is now our fourth clean sheet in a row and that is giving confidence to the players.