Monaco not an easy ride - Wenger 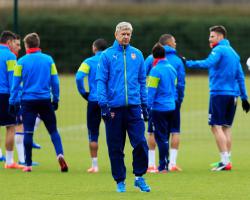 The Gunners found themselves unseeded for the knockout stages having finished behind Borussia Dortmund in Group D on goal difference, and so could have again faced one of Europe's big guns, as they did when coming up against German giants Bayern Munich who ended their hopes in the past two seasons.

Monaco were viewed as one of the weaker seeds, have scored only four Champions League goals this season, but still qualified as winners of Group C ahead of Bayer Leverkusen.

However, Wenger - who guided the Principality club to the Ligue 1 title in 1987-88 and semi-finals of the Champions League a few seasons later - insists at this level, any thoughts of complacency can be fatal.

"We have been in the Champions League for 17 consecutive years and that means we would have not learned the lesson - easy is a word that you have to ban in the Champions League," said Wenger, who revealed midfielder Jack Wilshere had been rested from Tuesday's training session as a precaution following his recovery after ankle surgery.

"Every time we were in there, it was hard-earned wins.

"It is always one-goal difference - you go out for one goal, you stay in for one goal and that means you have to work very hard.

"If you look at the teams who are (left) competing they are always a reason to think it is difficult, so let us just try to do the next game, go into that with belief and humility, to try to give everything we can."

Arsenal head into the home leg of the European tie on the back of some impressive domestic form, which has seen them reach the quarter-finals of the FA Cup and move up into third place in the Barclays Premier League following Saturday's 2-1 victory at Crystal Palace.

"I heard yesterday, they (Monaco) say we have the pressure because we are favourites, for me it is a 50/50 game," said Wenger.

"There is a pressure on the game, but that is what you want.

"Personally I love that because there is a lot of stake and that is the type of game you want to play when you are a manager or a player."

Wenger continued: "Monaco is a team who made 11 points at the group stage, scored four goals and conceded one, so that means they defend very well.

"That is what they will certainly try to do tomorrow and they are also very good on the break, quick in transition, so that is what we expect from them."

Wenger, who was sacked by Monaco in 1995 before moving on to Nagoya Grampus in Japan, will not allow himself any sense of nostalgia in facing his former employers for the first time in a competitive fixture.

It was my first chance to be in a big club, I was very young and you're always grateful for that," the French coach said.

"I am happy that Monaco are back at the top level, but I have been manager of Arsenal for 18 years and I am focused on just qualifying for the quarter-final against a good side."

Wenger continued: "It is the first time Monaco have put a lot of investment into the team again because they were in the second division.

"Now they are in the second phase of that process which means they respect the financial fair play more and have a strategy that is more based on youth."

Forward Danny Welbeck is confident Arsenal have the firepower to make an impact on the Champions League knockout stages.

"There are a lot of attacking options which gives the manager a good headache to have," said Welbeck, who was preferred to England team-mate Theo Walcott in the side at Palace, where he played a part in both goals.

"Once everyone is on the pitch we are going to give 100 per cent and give the best for the team, and that is the most important thing, you need to do your job properly

Whoever comes in will obviously do the same."