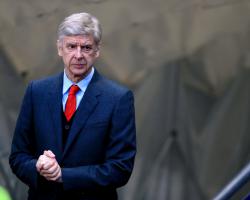 Wenger made his name as a manager during a successful seven-year spell at Monaco, which included leading them to the Ligue 1 title in 1988, winning the French Cup three years later and finishing as runners-up in the 1992 European Cup Winners' Cup.

Yet, since leaving the French Riviera after being sacked in 1994, Wenger, now in his 19th year in charge at Arsenal, has rarely come into contact with the team where he spent his formative years as a coach.

The Gunners were beaten by Monaco in a pre-season match before the current campaign, when a goal from Radamel Falcao, now on loan at Manchester United, gave Leonardo Jardim's side a 1-0 victory in the Emirates Cup.

But this last 16, first leg clash at the Emirates Stadium will be Wenger's first competitive clash with Monaco, prompting questions about whether he has fond memories of his time at the Stade Louis II.

Wenger's response made it clear romantic reflections on his past relationships came a distant second to keeping his players focused on their battle to finish in the Premier League's top four had been consuming all his waking hours.

"I have enough experience to know that the most important game is this one, after, you think about the next one, so it has not been hard," Wenger said after Saturday's 2-1 win at Crystal Palace lifted Arsenal to third in the league.

"We fought like mad to come back in a strong position in the (Premier League), and not to win (against Palace) would have been disastrous."

While Wenger was dismissive of his own memories of Monaco, the 65-year-old Frenchman is far too astute to be as offhand about his old club's current players.

After failing to reach the quarter-finals of Europe's elite club competition since 2010, due to a series of tough draws against the likes of Bayern Munich and Barcelona, this appears a golden opportunity for Arsenal to finally reach the last eight again.

But Wenger warned his players not to underestimate the French side, who are fourth in Ligue 1 and advanced to the last 16 as group winners thanks largely to a pair of impressive victories over Bayer Leverkusen.

"The last 16 in recent years has been super tough

Of course it will be tricky, but a possible tie.

They came back into a good position in the league and their confidence level will be high."

For much of an inconsistent campaign, Arsenal have once again offered more style than substance, but Wenger is confident the gritty nature of his side's win at Palace proved they have the mental and physical strength required to last the pace.

"The spirit is there and we want to keep that as a very strong basis, the team has come up a level and we will see that with the results," Wenger said.

Wenger must decide whether to change a winning side against Monaco, with England internationals Jack Wilshere, fit again following ankle surgery, and Theo Walcott having been left on the bench at Palace.

Monaco's main fitness concern is France left-back Layvin Kurzawa, who limped off against Nice with a leg injury.

"Layvin Kurzawa took a knock on the thigh but we will see if he can recover in time to play Arsenal on Wednesday," Jardim said.