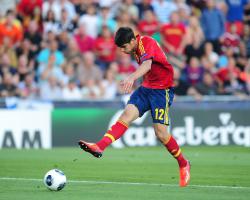 The Gunners are on the lookout for some attacking cover following a serious knee injury which has ruled England forward Theo Walcott out for the rest of the season and the World Cup.

The imminent return of Alex Oxlade-Chamberlain from his own five-month lay-off with a knee injury and the emergence of Serge Gnabry does at least provide Wenger with wide options.

But Arsenal would nevertheless like to bring in some support for lead frontman Olivier Giroud, who is set to return from an ankle problem and illness in Monday night's Barclays Premier League match at Aston Villa.

Real Madrid manager Carlo Ancelotti insisted following his side's Copa del Rey tie against Osasuna, where the 21-year-old came on as a late substitute, that he had no interest in allowing Morata out on a loan move.

Wenger also appeared to pour cold water on the rumours when he spoke to the media at London Colney on Friday morning, and indicated his focus was very much on the players he currently has at his disposal.

"Nothing has changed because we are open to a possible solution and if something interesting turns up we will do it. It could be a loan as well yes," said Wenger.

"We are not in talks, with Real about anybody.

"I do not want to speak about any specific names. for us it is important to prepare well for Monday night and to win the game on Monday night.

"The people who are in the newspapers do not help us to win the game on Monday night.

"It is the players who play here."

Wenger added: "The transfer market is a distraction that for me is not welcome.

"I think it would be much better that there is no transfer market at all in January and the team starts and finishes with the same players would be fair unless you have big injuries.

"For the rest what is important is that we focus on the quality of our performances because it's a period that is very sensitive at the moment and every game is now a massive game."

Wenger is confident Walcott can make a full recovery, but ruled out any hopes of a 'miracle cure' in time to save his 2014 World Cup dream.

"There are always people who (claim to) make miracles, but when you make more enquiries they never had surgeries of a football player who is a top athlete to prove their statement is right," said the Arsenal manager.

"We have enough experience on cruciate (ligament injuries) to know that the minimum time is six months to come back."

Wenger added: "We know deep studies show that the players around 25 with that kind of injury, they come back as normal.

Wenger feels Walcott's character can see him recover from another personal setback, having not been selected for the 2010 World Cup by then England boss Fabio Capello.

"What he has said to me is that he is under shock, but he will fight as ever to come back," said Wenger.

"He is strong mentally and if you look at his career, he has had a few setbacks, a few disappointments.

"To be left out in South Africa was certainly a massive blow to him and he always recovered from it in a very strong way.

"I am confident he will do so again. I have said we will be on his side and support him as much as we can."