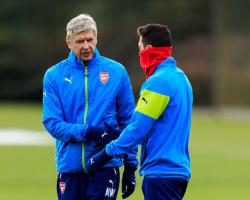 The Frenchman celebrated 20 years in charge of the Gunners in 2016 but his current deal only runs until the summer.

Wenger has not said whether he will sign a fresh contract but last week Ozil told German magazine Kicker he wants to know whether the 67-year-old will still be at the helm if he is to agree new terms.

Ozil, as well as team-mate Alexis Sanchez, both have 18 months left on their deals and are reportedly seeking parity with the Premier League's top earners if they are to remain at the Emirates Stadium beyond 2018.

But Ozil's comments suggest it is more than just money that will shape his decision.

"The club know that I'm here above all because of Arsene Wenger, who brought me here and whose trust in me I enjoy," he said.

Wenger was unconvinced and feels there are many aspects that will guide Ozil's decision.

Asked if he had been put under pressure to decide his own future following the quotes, the Frenchman replied: "No, not necessarily.

"He would like to know what happens on the managerial front of course, but I don't think that's the main part of his decision.

"I think it's part of it, but it's not the only thing

There are many other ingredients in every negotiation

Hopefully we will find a conclusion with him very quickly."

Wenger has been pressed on both Ozil and Sanchez's contract situations on an almost weekly basis for the last couple of months.

The pair are Arsenal's two most expensive acquisitions in their history but, with the club currently sitting outside the top four, their futures remain unclear.

Despite that, Wenger insists he is not worried about the apparent impasse, having previously suggested he would let the duo run down their contracts and leave for free rather than look to sell them.

Asked if he was relaxed about the situation, he said: "Very relaxed

I speak more with his agent on that front, about contracts, than I do with him

"We do not master that situation alone

"We have to keep that as quiet as possible and try to find an agreement and at the end of the day, as well, respect our line of conduct that we always have."

Arsenal were boosted on Thursday by the news that French international trio Laurent Koscielny, Olivier Giroud and Francis Coquelin had signed new contracts.

And Wenger hopes his compatriots putting pen to paper could inspire others within his squad to do the same.

"Generally I would say yes," he said when asked if others may be encouraged to follow suit.

"Because the squad has a great spirit and I believe as well that the players will want to stay together."

One player whose long-term Arsenal future is likely to be placed in further doubt is Carl Jenkinson, with Wenger admitting the full-back could leave on loan in the coming days.

Jenkinson has barely featured this season after suffering a serious knee injury and is expected to join Crystal Palace until the end of the campaign.

He has previously played for Eagles boss Sam Allardyce during a loan spell at West Ham and Wenger said he is anticipating a deal for the 24-year-old.

It's a possibility," he said.

When asked if Palace was Jenkinson's likely destination, Wenger added: "You sound well-informed."

The club announced the signing of young defender Cohen Bramall earlier in the week but are unlikely to spend big in the January window.

Wenger channelled United States President-elect Donald Trump when asked if a deal for Torino forward Andrea Belotti was on the table.

"That's what you call today 'fake news'," he said, referencing Trump's response to a dossier allegedly held by the Russians which contains comprising material about him.

Ozil has missed the last three games through illness but returns to the squad for Saturday's trip to Swansea.

Sanchez, Koscielny and goalkeeper Petr Cech will also be recalled having been rested for the FA Cup third-round victory over Preston last weekend.