My world fell in during Piegate controversy says keeper Shaw 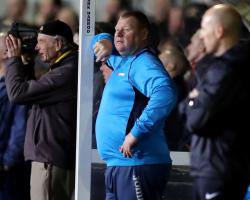 The 45-year-old, who held several positions at the National League club, including back-up goalkeeper, lost his job after being seen eating a pasty on television during his giant-killing side's high-profile FA Cup clash with Arsenal.

Following the match it emerged Shaw knew Sun Bets had offered odds of 8-1 that he would be seen eating on camera.

Sutton swiftly terminated his contract, but he has denied making any money from the stunt and said the fallout left him fearing for his mental health.

Speaking to Radio 5 Live, he said: "My world fell in

I was in tears

I had never been sacked in my life

It's on my mind every day, it probably will be for a long time.

"I've been through depression

I wasn't sleeping right, I could feel myself getting stressed

And I've still got that knot in my stomach."

The Football Association and Gambling Commission opted to look into the incident and, the day after the game, Shaw lost his job.

"The following afternoon it was a situation where I either resigned or they sacked me," he added.

"No-one asked for my side of the story

The club's knee-jerk reaction was that they wanted nothing to do with it.

I probably got carried away, after a whole career of having the mickey taking out of me

That was all it was meant to be."

The investigation is still ongoing and Shaw said: "I'm still left in limbo

I've never been in trouble before and it's like I've done something criminal."