Nacho Monreal has said that Arsenal's remaining objective for the season is to finish in one of the Premier League's top four spots.

Monreal's statement should come as no surprise, as Arsenal have already been eliminated from the two domestic cups, and after the 3-1 loss to Rennes in the Europa League on Thursday their chances of winning the competition have diminished dramatically.

With the fans clamouring for Champions League football after a two-year sojourn, Monreal claims that the only only realistic goal the club has at the moment is a top-four finish. 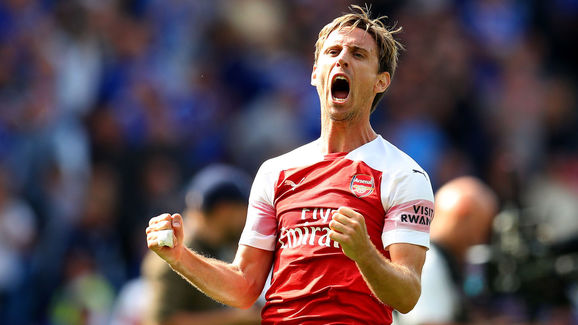 "We don't know in what position we will finish, but our target for the season is to finish in the top four. It is the target for the club and we are going to fight for that," Monreal told ​Sky Sports.

"We have two different ways - first is finishing fourth in the league, this is our idea and, if not, we will have the opportunity to win the Europa League and play in the Champions League next season."

"We have two different ways but I hope we finish in the top four and we get our target.

"The club is improving a lot. We have been working well in the last few years but probably the last two, we went down a bit and we didn't qualify for the Champions League - this was our target, honestly."

Manchester United have never won back-to-back away games against Arsenal in the Premier League#ARSMUN pic.twitter.com/Re9v985dCF

Arsenalhost ​Manchester Unitedon Sunday in a game that will go a long way towards deciding where they finish in the Premier League.

Ole Gunnar Solskjaer has already beaten Arsenal in the FA Cup during his short reign as United boss, but Monreal feels Arsenal are more prepared this time around.

"It is going to be a different game," he added. "Now, they have a few players injured, the last game was in the cup, now it is in the ​Premier League - they are completely different.

"We learned a lot [from the FA Cup game] and since they changed the manager, they have improved a lot, that is the truth. Jose Mourinho is a good manager but obviously he had a lot of problems with the players and since Mourinho left, Manchester United has grown a lot."