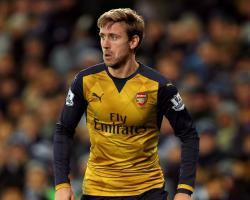 Monreal, who joined the Gunners in January 2013, has been in impressive form this season and has featured in all of the club's Barclays Premier League matches

The 29-year old defender said : "I'm really happy because my intention was to keep playing for Arsenal

Monreal, who arrived from Malaga for a reported ÃÂ£10million, has won successive FA Cups with Arsene Wenger's side and usurped Kieran Gibbs from the left-back spot

The Spaniard added: "I have a good relationship with my team-mates and we keep improving year after year

I wanted to stay here and I could extend my contract

I would like to play here for many more years.

For these reasons I extended my contract

"I'm very happy with my performances this season

"But now I feel more comfortable with my team-mates and with everything in general so that has helped me to play better because I have more confidence in myself."

"He is a very important player at the club because he can play left-back and centre back," said Wenger, whose Arsenal side sit at the top of the Premier League

"Overall, his attitude has been absolutely fantastic on a daily basis since he arrived here

He's well-accepted and loved by his partners

Arsenal are gifted at the moment, I must say, with two top-class left backs

We have many young players

They need to be surrounded by experienced players, especially at the back

"We now have experience at the back

Nacho is part of that - he's a good example for the young players and we have a good bunch of young players."