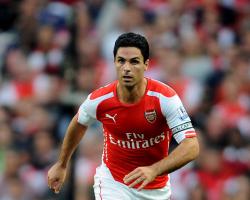 The Spaniard's extension fits in with Arsenal's policy of offering single-season contracts to their older players.

"He will stay with us for one more year because he has extended his contract," manager Arsene Wenger told Arsenal Player.

I expect him to contribute much more than last season but he also faces a battle.

"With the number of games we have ahead, we could use his experience, his desire and his quality as it will be vital for next season."

Arteta joined Arsenal from Everton in August 2011 for ÃÂ£10million and has gone on to make 136 appearances for them, scoring 16 goals.