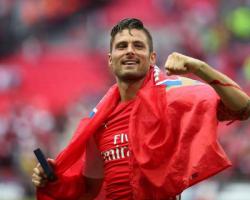 The French striker was reported to have been signed a new deal with the Gunners, and Wenger said on Tuesday that everything is in place barring the formalities.

When asked about the situation with Giroud - currently out injured with an ankle problem - Wenger said: "It is done".

Wenger added: "We want stability and to keep the core of our team together

Giroud is an important player here.

When it is completely done, we will announce it."

Wenger, speaking ahead of Wednesday's Champions League clash with Galatasaray, also had a fitness update on Mikel Arteta and Aaron Ramsey.

The former has a calf problem and the latter a hamstring strain, and they are expected to miss four weeks each.

"To be generous with time, four weeks

If all goes well, three

Arteta is the same, maybe a bit quicker

It will be after the international break," he said.

Jack Wilshere trained despite hurting his ankle against Tottenham at the weekend, while Theo Walcott is due to return to training next week after the knee injury which ruled him out of the World Cup.