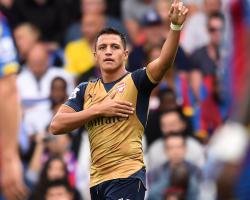 Newcastle V Arsenal - view commentary, squad, and statistics of the game live.McLaren not planning on high-profile exits from NewcastleNewcastle head coach Steve McClaren is hoping to hang on to all his best players as the transfer window draws to a close.Speculation has been rife all summer that one of the Magpies' bigger names - the likes of Tim Krul, Cheick Tiote, Moussa Sissoko or Papiss Cisse - could leave St James' Park if a sizeable offer was received with Andy Carroll, Yohan Cabaye and Mathieu Debuchy having done just that in the recent past.But Newcastle, who have spent in excess of B#50million this summer, seem intent on hanging on to all the men they want with only fringe players up for grabs after owner Mike Ashley's vow to build a side capable of winning a trophy.Asked ahead of Saturday's early kick-off against Arsenal at St James' Park if he expected any more departures McClaren said: "I hope not - we have no intention of."There's a great determination from the club, to reiterate from two weeks ago, that we don't need to sell, we don't have to sell, we don't want to sell."We don't want to loose any of our best players."We want to bring players in - we have done that with [Florian] Thauvin

At this present moment, we are happy."McClaren admitted last week that he was not expecting further additions to a squad which has been boosted by the arrivals of Chancel Mbemba, Georginio Wijnaldum, Thauvin, Aleksandar Mitrovic and Ivan Toney, and recent signs have been promising.Newcastle emerged from last Saturday's trip to Manchester United with a hard-earned point, while Thauvin scored and provided three assists on his full debut in a 4-1 Capital One Cup second round victory over Northampton to raise spirits ahead of Saturday's home tester against Arsenal.They will be further strengthened from the game at Old Trafford by full-back Daryl Janmaat's return from suspension, and Sissoko's potential availability after his quicker-than-expected recovery from a groin problem.McClaren said: "We thought he [Sissoko] would have no chance, to be honest

He has healed well

Is he ready? We'll decide that tomorrow."He has trained a couple of days with the team

We will just have to weigh up the fitness side of it - 95 minutes, going away on international duty? We'll decide that tomorrow."Arsenal head north in the midst of an indifferent start to their season.Optimism had been high heading into the new Premier League campaign, but a victory at Crystal Palace has been sandwiched with a defeat against West Ham on the opening day and their draw with Liverpool on Monday night."We have not had the ideal start and we are conscious of that but we want to play 60 games in the season," Wenger added."We have played three games now and we have lost one that we should not have lost, but we have to be conscious that the season is not decided yet."Maybe we are not firing on all cylinders at the moment

Not everybody is ready physically

Certainly at the moment we want it so much at home that we're trying to force it a little bit."Wenger could be without his first-choice central defensive partnership on Saturday with Laurent Koscielny (back) and Per Mertesacker (chest infection) both doubts for the St James' Park trip