No change on Wilshere prognosis 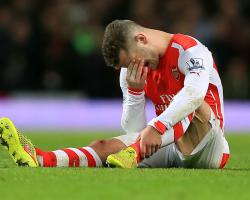 It was reported on Monday morning that the England midfielder had suffered a setback in his recovery and could be out until at least March.

But it is understood the original prognosis still stands, with Wilshere set to return after a 12-week absence following the injury suffered against Manchester United on November 22.

Wilshere underwent surgery on November 27 and an Arsenal statement at the time read: "Jack Wilshere has had successful surgery on his left ankle and will be out for approximately three months.

"An assessment with a specialist confirmed the need for an operation and the 22-year-old had successful surgery to his ankle in London on Thursday afternoon."

The north London derby against Tottenham on February 7 is likely to be just too soon for Wilshere to make his return.

A home game against Leicester follows on February 10, with a potential FA Cup fifth-round tie the following weekend and then the first leg of the Gunners' Champions League last-16 tie.

To win the group, they must win and hope Borussia Dortmund lose at home to Anderlecht.

Wilshere should also be available in plenty of time for his next international commitments, with England taking on Lithuania in their next Euro 2016 qualifier on March 27.