No dwelling on loss - Mertesacker 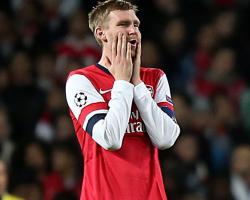 The Gunners lost 2-0 to the reigning European champions at the Emirates Stadium on Wednesday night in a match where club-record signing Mesut Ozil had a tame early penalty saved and goalkeeper Wojciech Szczesny was then sent off for tripping Arjen Robben in the box.

Bayern full-back David Alaba sent the resultant spot-kick against the post but there was to be no great escape for the English side as eventually Bayern's patient build-up was rewarded when Manchester United target Toni Kroos fired home a 20-yard effort and substitute Thomas Muller headed in a late second to all but kill off the tie.

Arsenal must now regroup for Saturday's visit of relegation battlers Sunderland when Arsene Wenger's side will look to keep pace in the race for the Barclays Premier League title.

"We will concentrate on Saturday now, because we are going through a period with a lot of games," German centre-back Mertesacker said.

"We will switch off from the Champions League now, and then switch on again (for the Premier League) on Saturday.

"We need that because we have played a lot of games

Our team has great spirit and will come back from this.

"The next tie against Bayern is not now for a few weeks, so a couple of days before that game we will (think about it).

"Now, we must keep our chins up and to think we have a chance to do again what we have done (in Munich) last year."

Arsenal can retain some slim hope of an unlikely comeback given their 2-0 win at the Allianz Arena last season, which saw them exit only on away goals.

However, there is no escaping the obvious disappointment of a missed opportunity to have put the European champions on the back foot.

Mertesacker added: "Against Bayern, you have to be ice cold, you have no chance if not.

"They have a lot of players who can shoot into the top corner and make it look easy with the way they keep the ball.

"With just 10 men, it was a suicide mission, and the second goal hurt us."

Before Arsenal travel to Munich for the March 11 tie, they will have played a home FA Cup quarter-final against Everton and also could well have overhauled both Chelsea and Manchester City, so small are the margins in this season's top-flight race.

"There are positives to take

It has shown us that we can compete even when we have got our backs against the wall," the England World Cup hopeful told Arsenal Player.

"The character we showed in the second half and the fight just to try and hold onto what we could, we can definitely take that into the next game against them.

"This time last year we lost 3-1 here and we went there and won 2-0, so that shows it is never over in this game.

"It is going to be tough, but we will go there with belief that we can do it."

UEFA, meanwhile, is waiting on reports from match officials and observers before deciding whether to launch disciplinary action against Szczesny for an offensive hand gesture made as the Poland goalkeeper walked off down the player's tunnel following his dismissal.