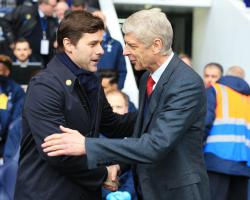 Whilst there are many ways that a clubÃâs size and power can be assessed, it is money spent that is the most often referred to during a transfer window

So given that as the judgement parameter, how do the two North London giants measure up to each other so far?

Starting with Arsenal, for alphabetical reasons only, the first 10 days of the current January trading period has seen them splash out a less than impressive ÃÂ£40,000

Now if you are wondering what that amount of money can buy you in 2017, then look no further than Hednesford Town and Cohen Bramall.

Whether the left back will turn out to be a long-term replacement for Monreal and Gibbs remains to be seen, but for now he represents Arsene WengerÃâs only activity in the January 2017 window.

But no, maybe because the LilywhiteÃâs board and Mauricio Pochettino are happy with their young squad or maybe because the new stadium build has tightened the purse strings, Danial Levy has so far kept his chequebook firmly in his pocket. But before the Gunners can start crowing about being North LondonÃâs top spenders, there is a another contender for the crown Barnet! The Bees have shattered their transfer record and spent a whopping ÃÂ£100, 000 on Peterbourough UnitedÃâs 21 Portuguese defender, Ricardo Almeida Santos.

So, whilst it may be early days, for the time being at least, the Bees can claim to be top dogs and the Hive is the place to go if you want to watch North LondonÃâs most expensive new signing.