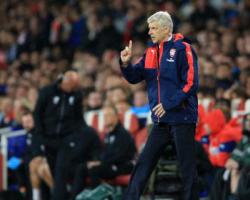 Having lost at home to London rivals West Ham on the opening weekend of the Premier League season, the Gunners were again frustrated on their own patch as Liverpool took a point back to Anfield.

Ramsey had a first-half goal incorrectly ruled out for offside, although it was the visitors who dominated the opening 45 minutes with Arsenal goalkeeper Petr Cech back to his best to brilliantly deny Christian Benteke and Philippe Coutinho - who hit the woodwork twice.

Arsenal, without first-choice centre-backs Per Mertesacker and Laurent Koscielny, hit back after the interval and enjoyed their own half on top of the contest - but could not find a winning goal as Wenger saw his side draw a blank for the fifth time in their last six league games at the Emirates Stadium.

But it was Ramsey's disallowed strike that left the Frenchman irked at full-time as Liverpool benefited from an incorrect call for the second successive Monday, having seen Benteke's match-winner against Bournemouth controversially allowed to stand.

"It was a regular goal," said Wenger.

"It was in a period of the game when we had the most problems defensively but it is a regular goal, I can't see why it was cancelled, it was clear.

"I didn't ask for an explanation (from referee Michael Oliver), what does it change? It is about decision-making and they got it wrong, I could see live that he could not be offside.

"Liverpool played well in the first half and we were insecure defensively, we gave them many balls and created problems for ourselves - they (Liverpool) cannot complain about the refereeing in the last week."

Arsenal's problem remains scoring goals and they were handed a blow in their hunt for a new forward when reported summer-long transfer target Karim Benzema said his future remains at Real Madrid.

The France forward has been persistently linked with Arsenal, but took to Twitter on Monday to say he was going nowhere.

Here this is my home ! #HalaMadridYNadaMas,'' Benzema wrote.

"Lucas is our best defensive midfield player," he said of the Brazilian, who started his first game of the season at Arsenal.

"There are games I will play three midfield players but not a defensive-specific one, when we do want that he is is best we have

He came in and did a good job, he is very much part of what we want to do.

"We definitely could have had all three points, performance-wise I was very happy with how we worked."

When asked about Mario Balotelli's potential loan move to AC Milan, Rodgers was less open: "I don't know anything on that," he replied.