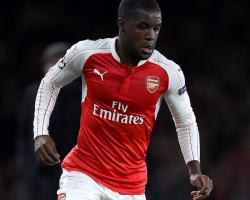 The Costa Rica international doubled his tally for the season when he slotted home Mesut Ozil's pass in the 3-1 victory which took the Gunners up to second in the Barclays Premier League.

Campbell has spent plenty of time out on loan since joining Arsenal in 2011 but manager Arsene Wenger has already declared the 23-year-old is very much part of the first-team picture at the Emirates Stadium.

Saturday's goal may have only been his second of the campaign but Campbell has impressed on the flanks while the likes of Theo Walcott, Alex Oxlade-Chamberlain, Aaron Ramsey and now Alexis Sanchez have been out injured.

And Giroud, who scored an own goal to bring Sunderland level before tucking away a smart header in the second-half, is pleased to see his team-mate taking his chance.

"I'm happy for him because he has the opportunity to show his talent," he told Arsenal Player.

It's not always been easy for him but I always used to speak with him, encourage him and when he's playing like that he's very important for us

Hopefully we're going to see more of him in that form."

Giroud's 10th goal of the season sees him move clear as Arsenal's top goalscorer and, after Aaron Ramsey's injury-time goal added a third for the Gunners, the France striker admitted the somewhat scrappy victory was crucial.

"I was frustrated but now I'm very pleased to score the second goal and help the team win the game," he added

"We needed this win and it was not very easy, not everything was perfect, but this win will relieve us."

Sunderland boss Sam Allardyce had seen his side win their previous two games heading into the clash in north London but defeat now leaves them back in the relegation places.

The Black Cats gave a good account of themselves, with Allardyce claiming it was the best performance he had seen since taking over in October.

Midfielder Ola Toivonen was recalled to the side in a deeper role and the Sweden international now knows the players must put in the same kind of shift at home to Watford on Saturday.

"It is a big game next week," he told the club's official website.

"We have to do the same work as today, it is similar to the Stoke one, it will be an open game that can go either way

I hope we win.

"I think we deserved a better outcome from this game

Overall, we should be happy with the performance."

"I'm happy to be back and have a solid game and I'm a bit disappointed my legs didn't carry me on past 66 minutes but I'm looking forward to the next game."