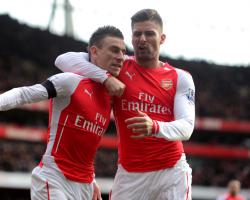 France striker Giroud, 30, has returned to the side in recent weeks to score four goals in as many appearances, including his scorpion kick effort in the win over Crystal Palace

Coquelin, 25, has developed into a key member of the first-team squad following his return from a loan at Charlton in December 2014 while centre-back Koscielny has proved a consistent performer since joining from Lorient in July 2010

"We are very pleased that three important members of our team have committed to us for the long term," Wenger said on the club's official website, www.arsenal.com

"Olivier has big experience in the game now and has become a more and more complete player since joining us.

So overall, this is great news for us."

Wenger, meanwhile, has himself yet to formally announce any plans following the end of his current contract, which expires in the summer