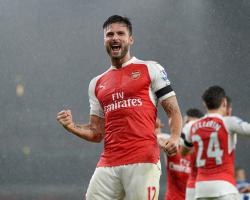 Going into the game having lost three of their previous five fixtures, the Gunners needed to win by two goals or more at the Karaiskakis Stadium or better the 3-2 defeat they suffered at home to the Greek champions in September.

With seven key first-team players missing through injury, Arsene Wenger recalled Theo Walcott after his recovery from a calf problem - but it was Giroud who would produce the goods when it mattered as Arsenal made light work of a seemingly difficult task to seal a 3-0 win.

For Giroud it would have been all the more sweet given he had been sent off in the 2-1 defeat at Dinamo Zagreb which started a run of poor results that led to tonight's scenario.

Arsenal become just the eighth side to advance through their group having taken three points or fewer from their opening four matches and Wenger will now be hoping to avoid the big names as they will come up against a group winner in the next round.

The Gunners took their time as they felt their way into the contest but finally stirred as Joel Campbell's cutback was struck goalwards by Mathieu Flamini, with a deflection off Manuel da Costa taking the ball onto the crossbar.

But the opener came just moments later as Mesut Ozil produced a sublime pass to set Aaron Ramsey away.

His near-post cross was met by the head of Giroud and the ball squeezed over the line as Olympiacos goalkeeper Roberto was unable to deal with it.

It was the hosts who nearly got the game's next goal as another sloppy pass from Hector Bellerin left Arsenal exposed and Brown Ideye's cross was turned inches over his own crossbar by Laurent Koscielny as the game remained finely poised at the interval.

There was concern for Giroud at the start of the second half as he fell awkwardly on his ankle while helping out his defence.

But he soon got himself back on the pitch and soon doubled Arsenal's lead after another well-worked move.

Ozil again started everything with a clipped pass to Campbell, with the former Olympiacos loanee controlling well under pressure before sliding a perfect pass into the path of Giroud for the France striker to sweep home.

Walcott came close to adding a third to give Wenger's men some breathing space but his effort was blocked behind for a corner.

Petr Cech then showed just why Wenger was so keen to sign him in the summer as he pushed away a curling Kostas Fortounis shot with the hosts looking for the one goal they needed to advance at Arsenal's expense.

Ideye should have done better when picked out in front of goal but Per Mertesacker was on hand to clear before the former West Brom forward could pounce.

Olympiacos had begun to set siege to Cech's goal but they were undone when referee Nicola Rizzoli pointed to the penalty spot as Nacho Monreal's shot was blocked by the arm of the diving Omar Elabdellaoui.

Giroud duly despatched the resulting penalty to complete his hat-trick and send Arsenal into Monday's draw for the first knock-out stage as they saw out the remainder of the contest with minimal fuss.

"So happy for the victory of the team, we are in the next stage !!! #UCL ???????" - injured forward Alexis Sanchez (@Alex_Sanchez) enjoyed the view from home

Olivier Giroud: Produced the goods just when his team needed him most

Has shared the goalscoring burden with Alexis Sanchez but, with the Chile forward injured, Giroud stepped up here

Tucked away his goals well, especially the second, and proved some doubters wrong along the way.

Joel Campbell: The Costa Rica international has developed into a key man in Wenger's side having grasped his opportunity with both hands

His control and pass to set up Giroud's second was masterful and gave the Gunners the platform to reach the last 16.

As it turned out, Walcott had a quiet night but Wenger prepared his team perfectly for such a tricky situation.

Losing to an average Dinamo side before Olympiacos shocked them at the Emirates, the Gunners showed their class in beating Bayern - they should have easily joined the German giants in the knockout rounds without the need for tonight's heroics.