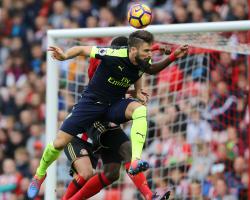 The France international struck twice inside five minutes after being introduced as a second-half substitute to contribute to a 4-1 victory at Sunderland in Saturday's early kick-off.

That allowed the Gunners to leapfrog Manchester City into first place, but only for a couple of hours as Pep Guardiola's men clambered back over them, if only by virtue of goal difference, with a 4-0 win at West Brom.

Giroud was delighted with the result, but insisted that with just 10 games gone, the season is still in its infancy.

He told the cub's official website, www.arsenal.com: "We've only played a quarter of the league

It's still the beginning of the league and I'm not the man who will speak too much because we are first.

"We enjoy this position, obviously we want to finish first and win the league, but we know there is a long time to go

We're in a good moment and we need to keep it up and be consistent."

It proved a good afternoon on Wearside for Giroud, who started the game on the bench but made an almost instant impact when his chance came.

Alexis Sanchez had given the visitors a 19th-minute lead with a bullet header from Alex Oxlade-Chamberlain's cross, but further chances went begging to allow struggling Sunderland to head for the dressing room at half-time still in the game.

The Black Cats got themselves back on level terms with 65 minutes gone when, seconds after Sanchez was denied a penalty after appearing to be dragged back by defender Lamine Kone, Duncan Watmore was tripped inside the box by keeper Petr Cech and Jermain Defoe converted from the spot

Giroud was introduced four minutes later and needed just two minutes to restore his side's lead when he steered home Kieran Gibbs' cross, and then added a second with a deft header from Mesut Ozil's corner.

He said: "If I could do that in every single game, I would be the most happy man

I've been lucky today - I had great assists from my team-mates, so I always try to finish the job well.

It's nice for myself and the team

To score is always important for a striker."

There was worse to come for the home side when Sanchez claimed his second of the afternoon from close range and courtesy of some nimble footwork after Gibbs' shot had come back off the post, completing a three-goal blitz inside a seven-minute passage of play.

Manager Arsene Wenger, who takes his side to Ludogorets in the Champions League on Tuesday evening, was a happy man after seeing Giroud return in such fine form.

He said: "With Giroud back, Ramsey back, Xhaka is not suspended any more, so overall, I think we are in a good position."